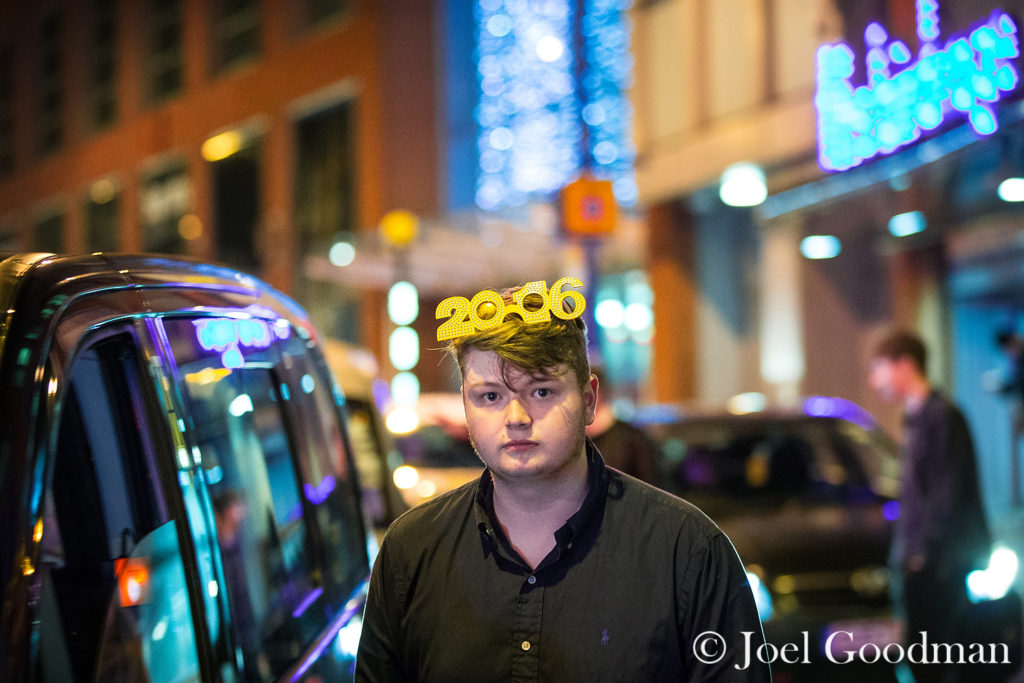 HARD NEWS
In the course of a year, photojournalists are likely to find themselves covering the kind of everyday tragedy that will shake someone’s world, yet draw little attention, beyond; 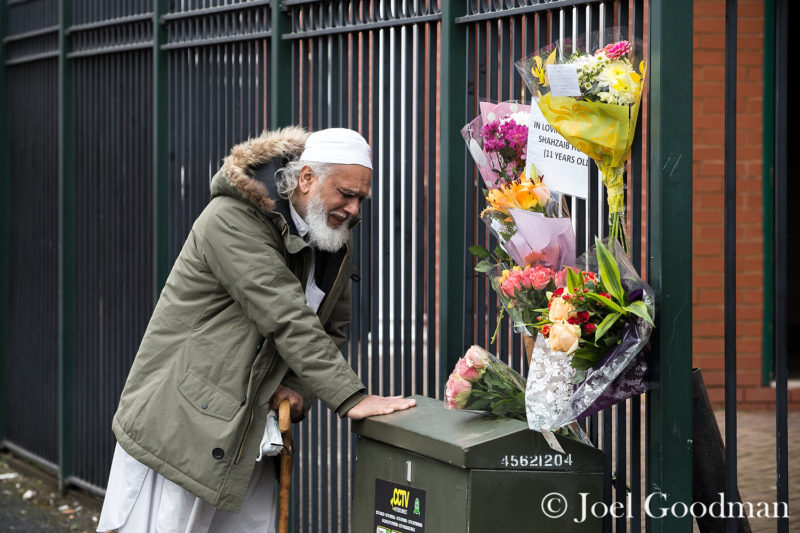 The uncle of 11-year-old Shahzaib Hussain, who was killed by a speeding driver in East Manchester, breaks down in tears in front of flowers left at the scene.
It’s a photographer’s cliche, but it really was a privilege to be invited to photograph at the funeral. Shahzaib’s father, Javid Hussain, at the burial of his son, two days later: 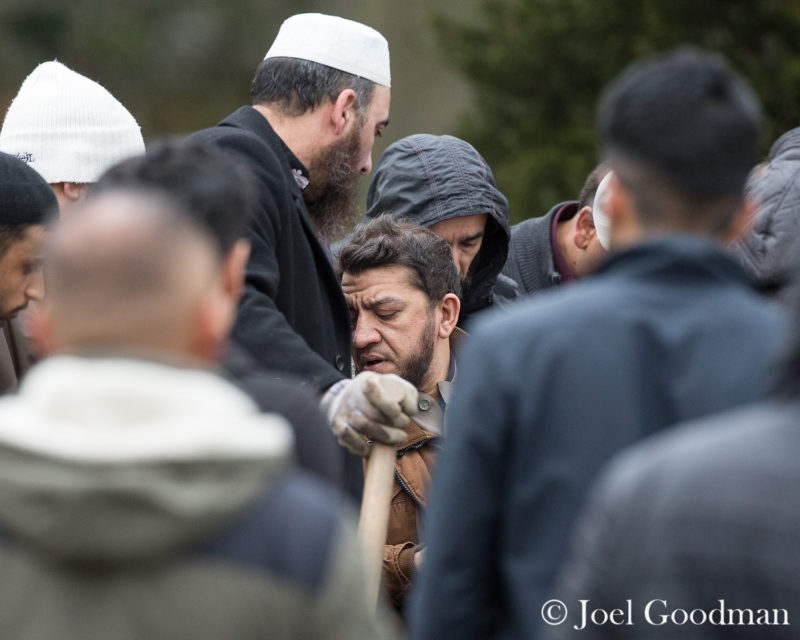 October saw the long-established Calais migrant camp, known as “The Jungle”, razed to the ground. On the night before the shutdown, police fired teargas in to the camp and residents responded by setting fires. This scene of French riot police running across the sandy ground between the camp and the fenced off road nearby, looks like an apocalyptic scene out of science fiction. 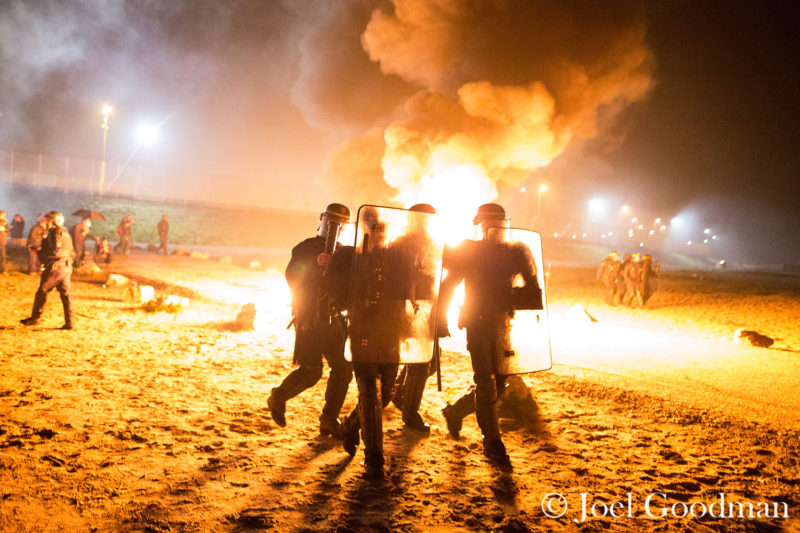 Although it was late, I was able to file the photo directly from my camera and it made the next day’s newspapers, including the front page of the Daily Telegraph: 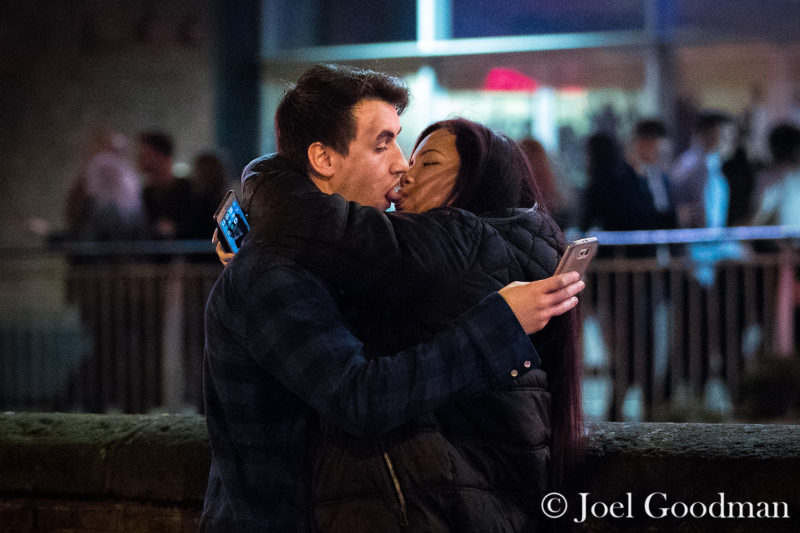 You never know what you’ll see at some events. This one definitely looks best when viewed large – an uncooperative Guy Fawkes night protester dressed like Catwoman, is handcuffed and carried away by running riot police, across Trafalgar Square. Her outfit, eye-contact with the camera and apparent nonchalance makes the scene feel staged, but it’s wholly real. I was pretty lucky to get a sharp shot of this. I was running backwards, shooting at 1/80 second at f/1.8 and without a flash. For all sorts of reasons, it’s one of my favourite photos from 2016. 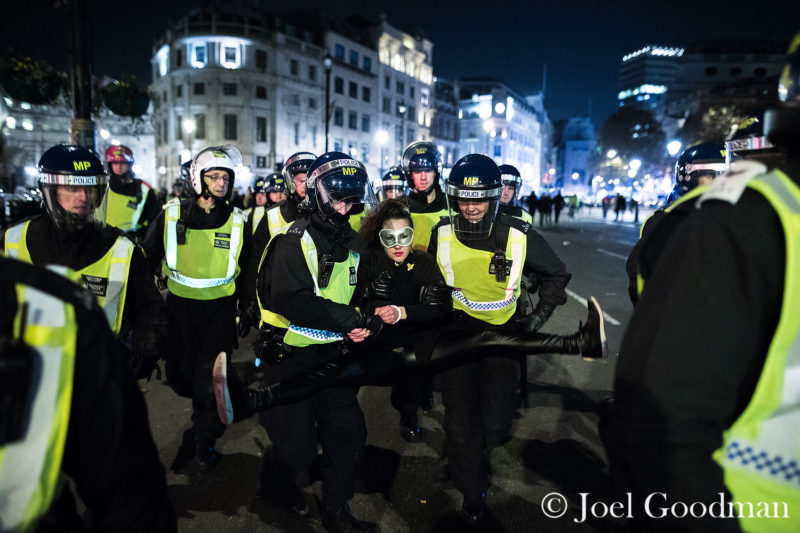 I suspect I’ll be photographing much more of the hard stuff in 2017.
POLITICS
Never work with children. Unless you want your photo op to go wrong. During a campaign stop at a nursery in Burnley, Lancashire, two-year-old Shaun Clough plunges his fist in to the side of a carefully sculptured “Vote Remain” cake, being lifted by Ed Balls and Yvette Cooper, for a prepared photo opportunity. 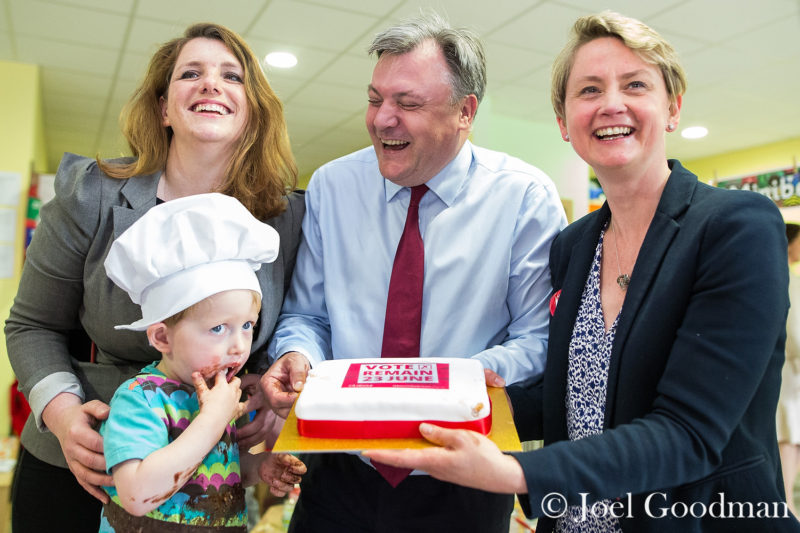 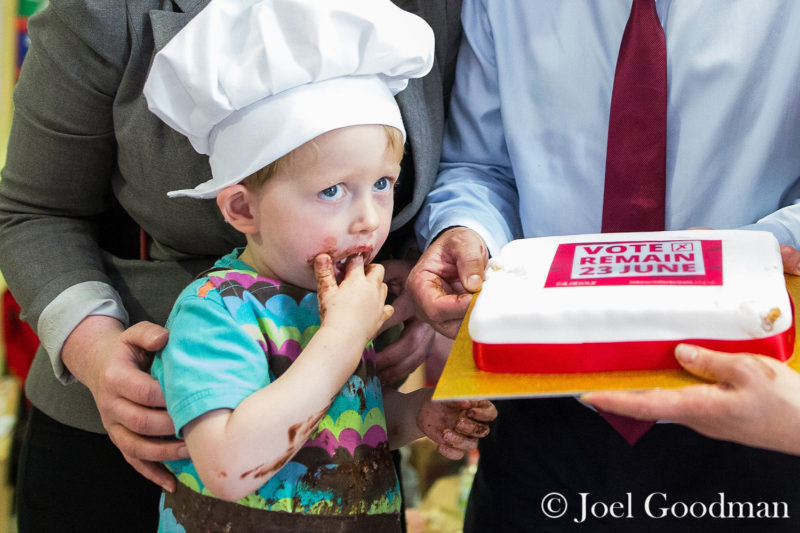 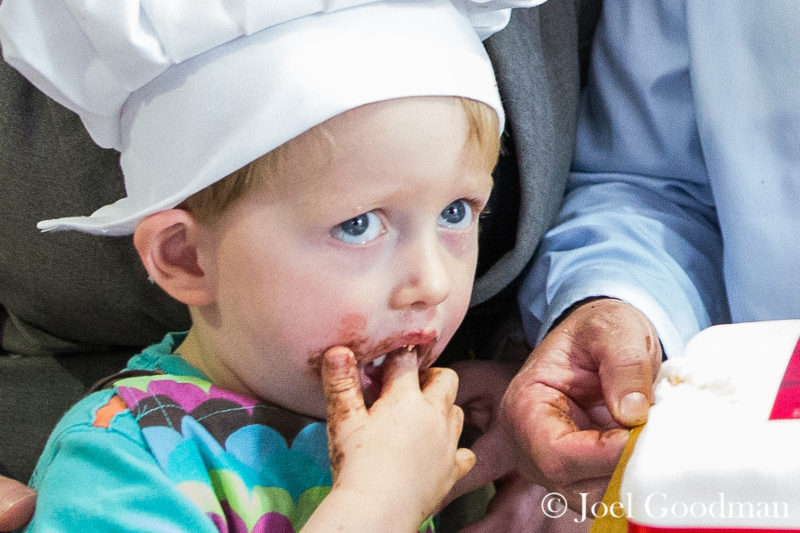 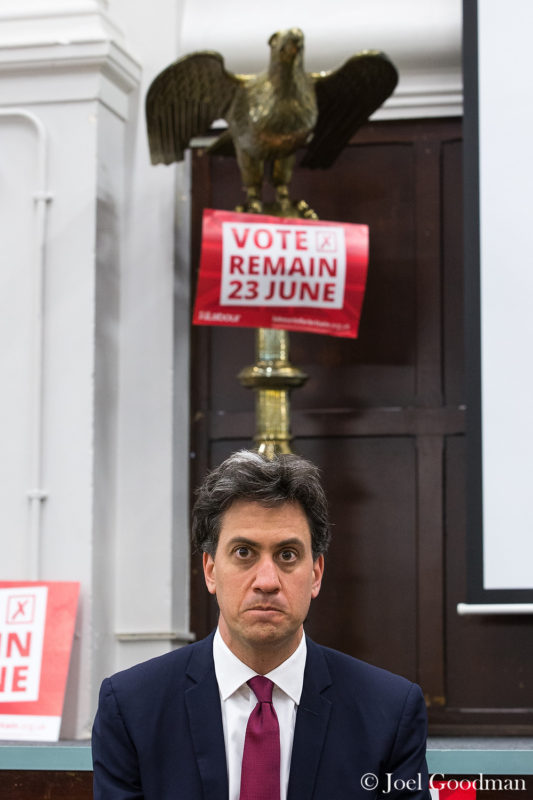 Eating and drinking often feature (some say unwisely) in political photo ops. Ed Miliband (pictured above) might have advised Owen Smith not to be photographed enjoying one of the free ice creams being handed out at a leadership campaign rally in Liverpool, during the battle for the labour leadership. 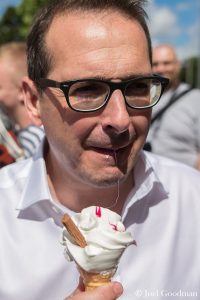 Shared 99s appeared to patch over the cracks in Tony Blair and Gordon Brown’s relationship. It proved less successful for Smith, who lost to Jeremy Corbyn, shown here drinking tea at the Beaconsfield Community Centre, hours after his victory. 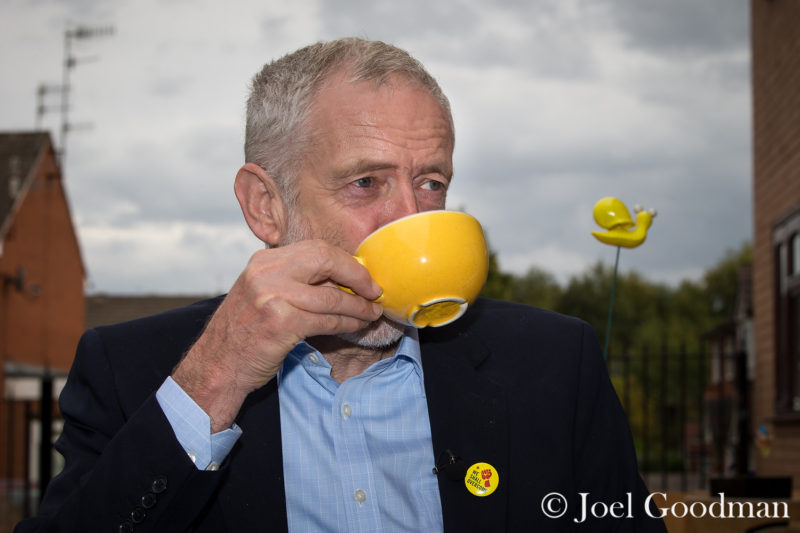 It’s not often that I turn my flash on and stop down to f/10 during a news job, but the yellows seemed to call for it, in a Martin Parr sort of way.
It’s really never appropriate for a news photographer to use a fisheye lens during a live news story. Proving why, here are the UKIP team at Manchester Town Hall, following the declaration at the EU referendum. 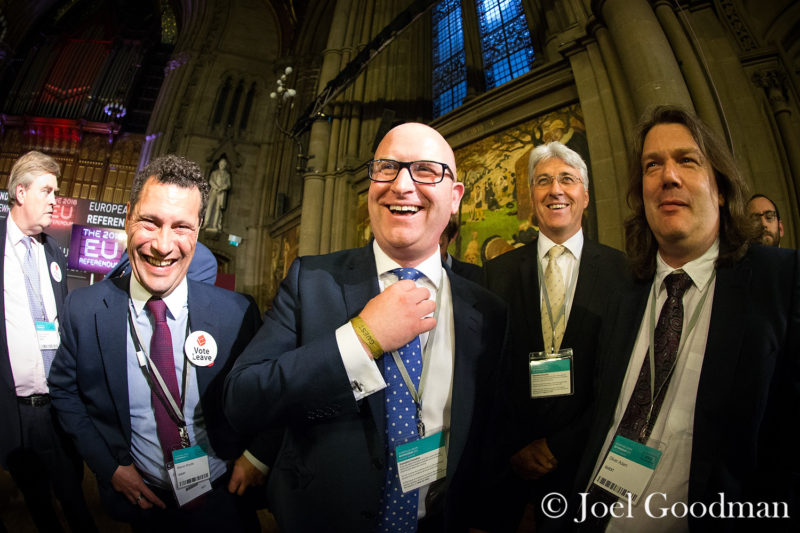 This scene of Brexit supporters waiting for the result made for a more sober (and publishable) photograph: 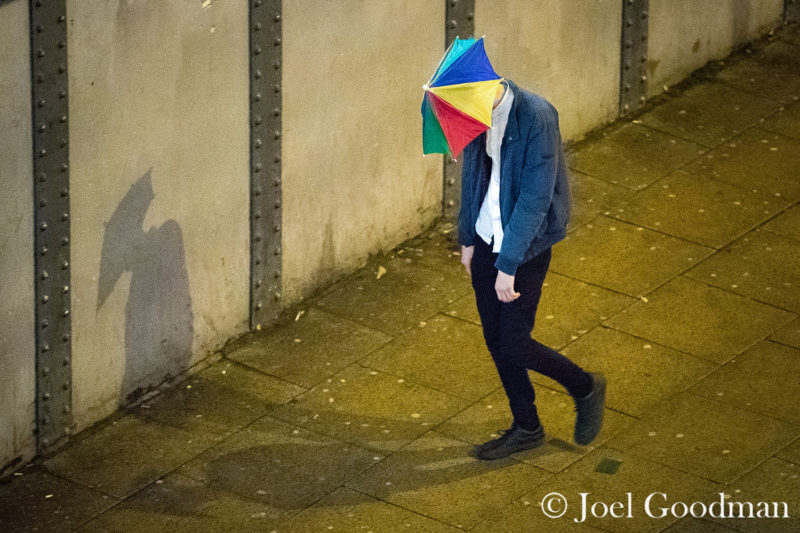 Unfortunate signage juxtapositions, such as this example from the Conservative Party Conference in October, prove that in even the most tightly controlled environments, you can’t factor for every eventuality. 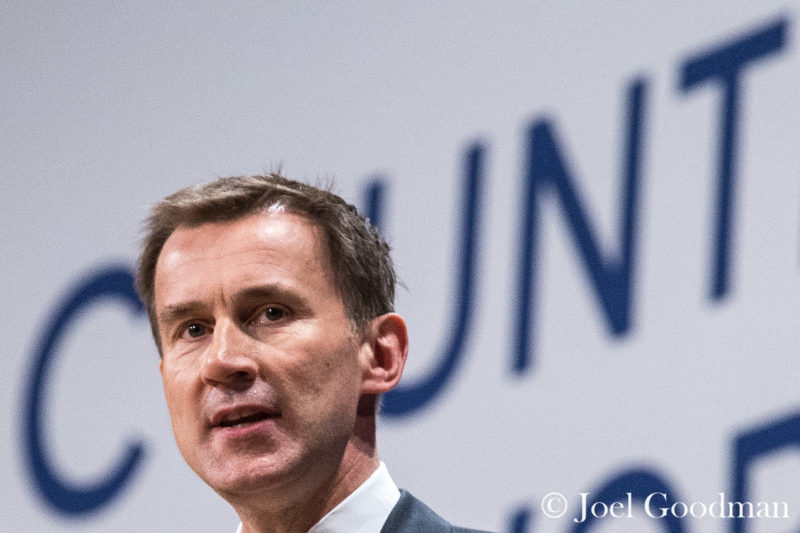 Repeated viewing of The Thick of It is now mandatory training for all party sign-writers.
FEATURES
Photographing Pete Waterman as he gave a joyful and enthusiastic lecture to students at the Royal Northern College of Music, I found myself frustrated by the lack of contrast and shape delivered by the location’s fluorescent lighting. The flat photos just didn’t seem to do the man justice.
Thinking of ways to soften the background and bring out the highlights, I remembered a colleague describing an old photographer’s trick to create fluffy, out-of-focus highlights in a photograph, without resorting to cheating in Photoshop (a no-no for news photographers). Composition is decided and then a rubbing of “nose grease” applied to the appropriate area of your lens’s front element. Definitely a trick I’m going to keep in my tool belt and, for anyone who was there at the time, this is why the photographer was lying on the floor, when everyone else was sat comfortably. 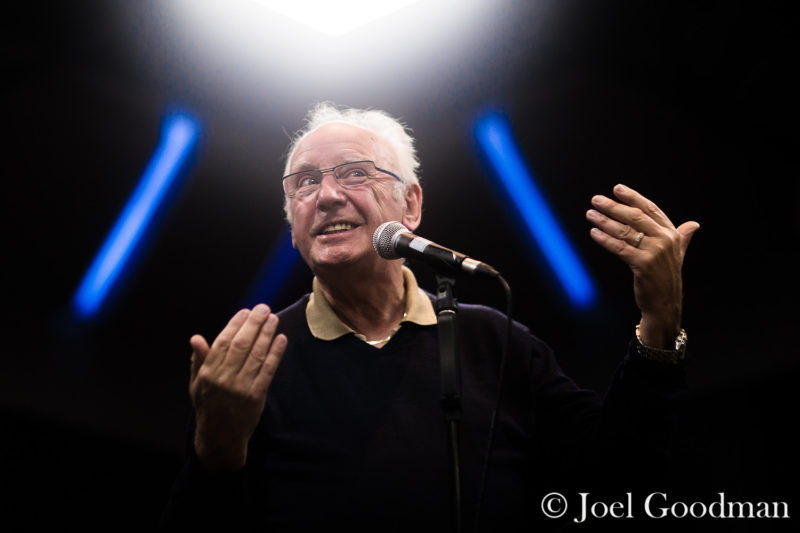 For a couple of years I’ve been taking portraits for Mersey Care, an NHS trust that provides a broad array of services on Merseyside, promoting good mental health and reaching out to make their support accessible to as many people as possible. I try to take photographs that tell people’s stories with respect and enthusiasm. Everyone involved is incredibly dedicated and protective of the community they serve, many of whom generously let me take their time and their photograph. It’s extremely fulfilling work. 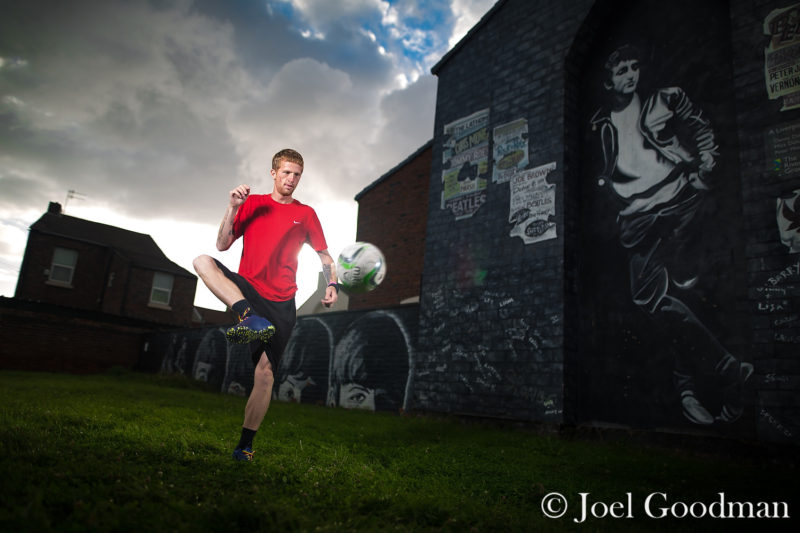 This is one of my favourites from the year, combining a slightly misbehaving sunrise behind (I envisioned more blue sky) and two lights, left and right at full and half power respectively, in a great location for context.
Sometimes I get commissioned by a newspaper to take photographs that illustrate a specific story. Working on such a job for The Times, I was sent to Ashton Hayes, which is aiming to become the first carbon neutral village in England. Through the day I took various portraits of residents and views of the village. I thought I was done when I spotted the sun setting behind a queue of people at a chip van in the village. They must’ve thought me strange as I ran across the car park to throw a remotely triggered light up in order to lift the van out of silhouette, and then ran back and lay on the tarmac to take this photo with a long lens. 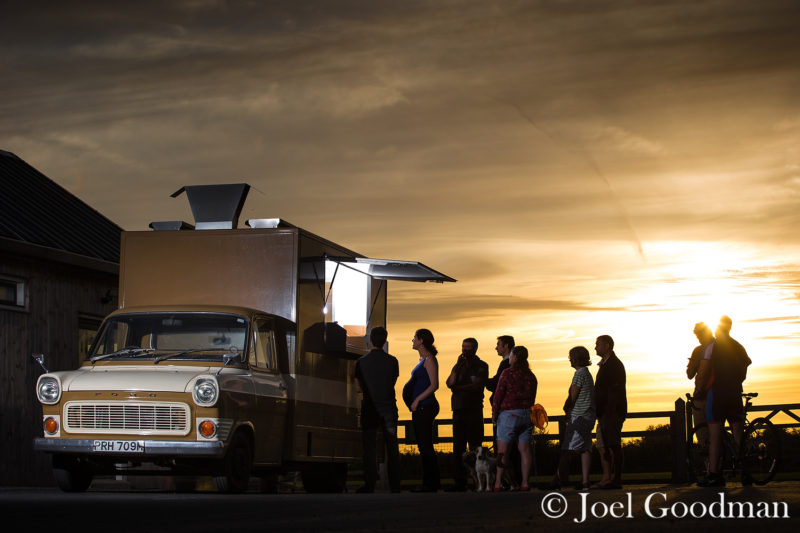 And finally in this section, a photograph from the poignant Candlelit Vigil, which closes the Manchester Pride festival every year and commemorates those who suffered and died from AIDS and those who still experience the stigma of HIV, today. 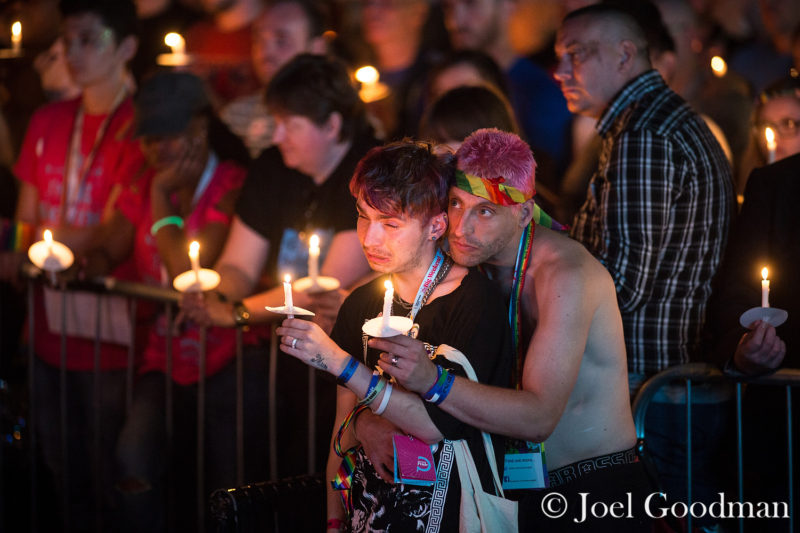 NIGHT-TIME ECONOMY
My eight-year project, photographing people on a night out in town, really bore fruit this year. What started as an exercise to improve my ability to shoot in low light, evolved in to an amateur documentary project and then in to a story that has become an occasional feature in the British press – and further afield. Here are just a few of the hundreds I took, following this story, this year: 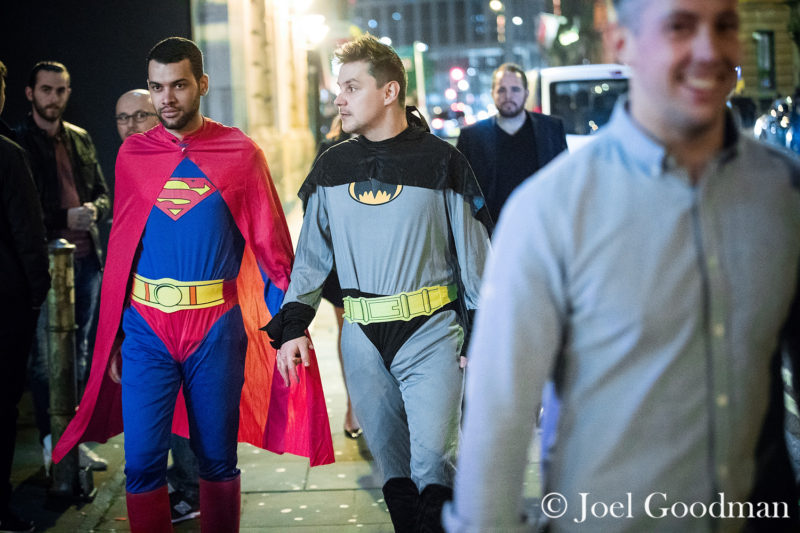 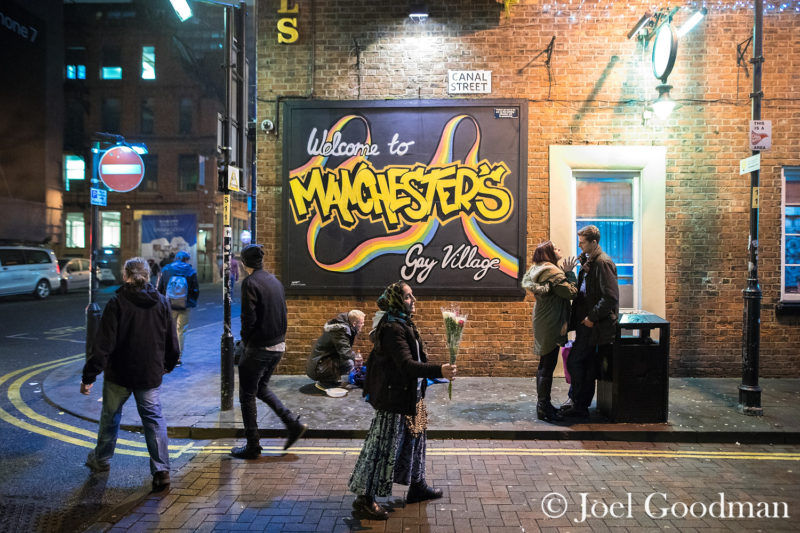 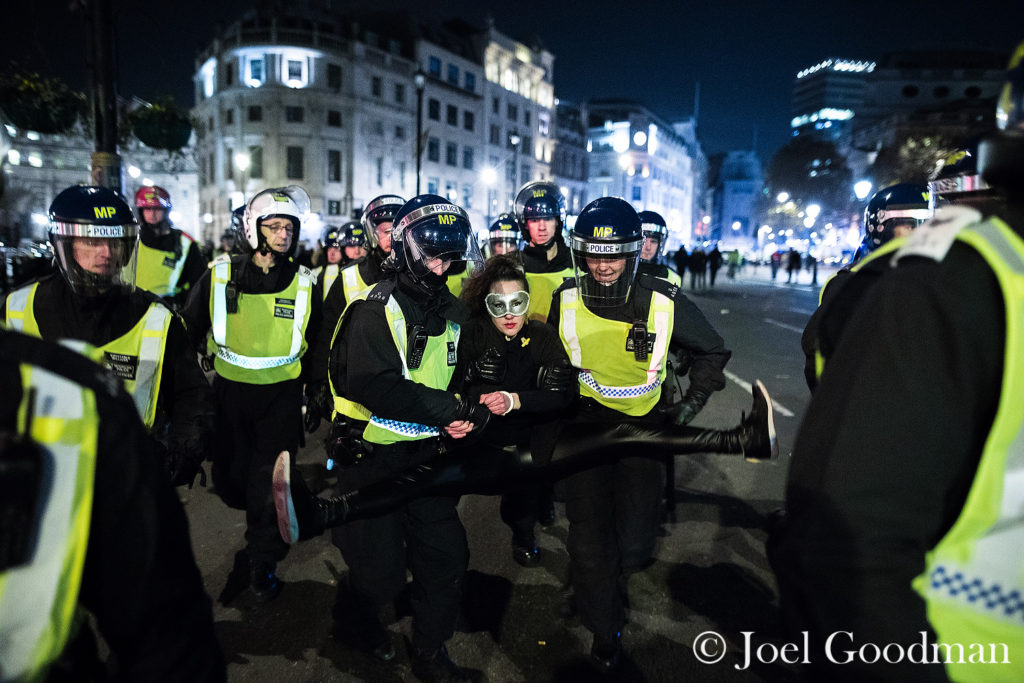 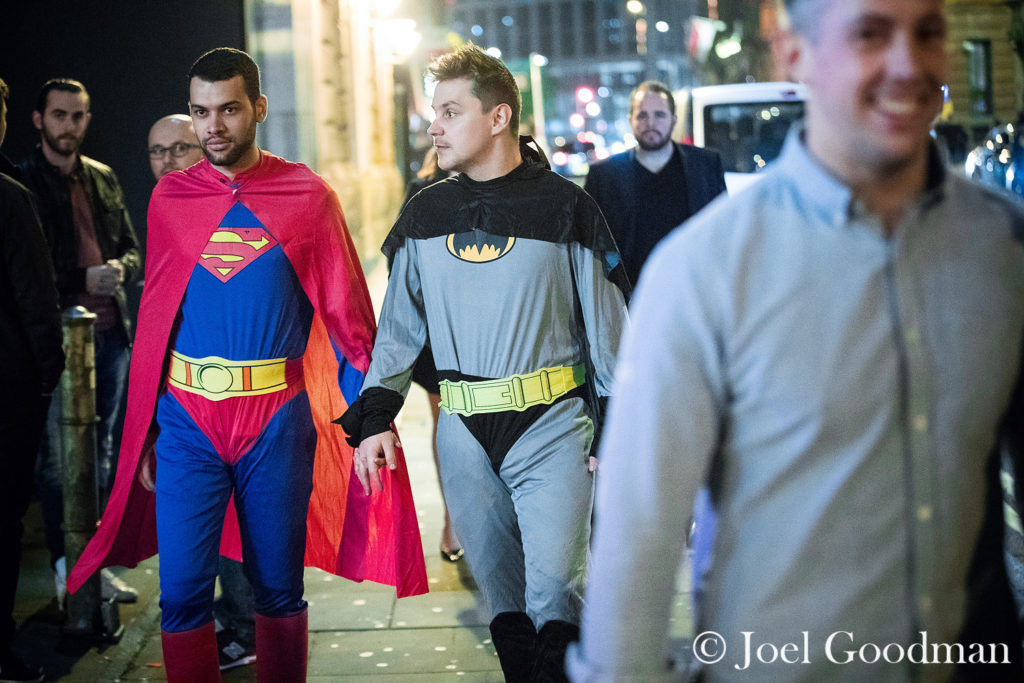 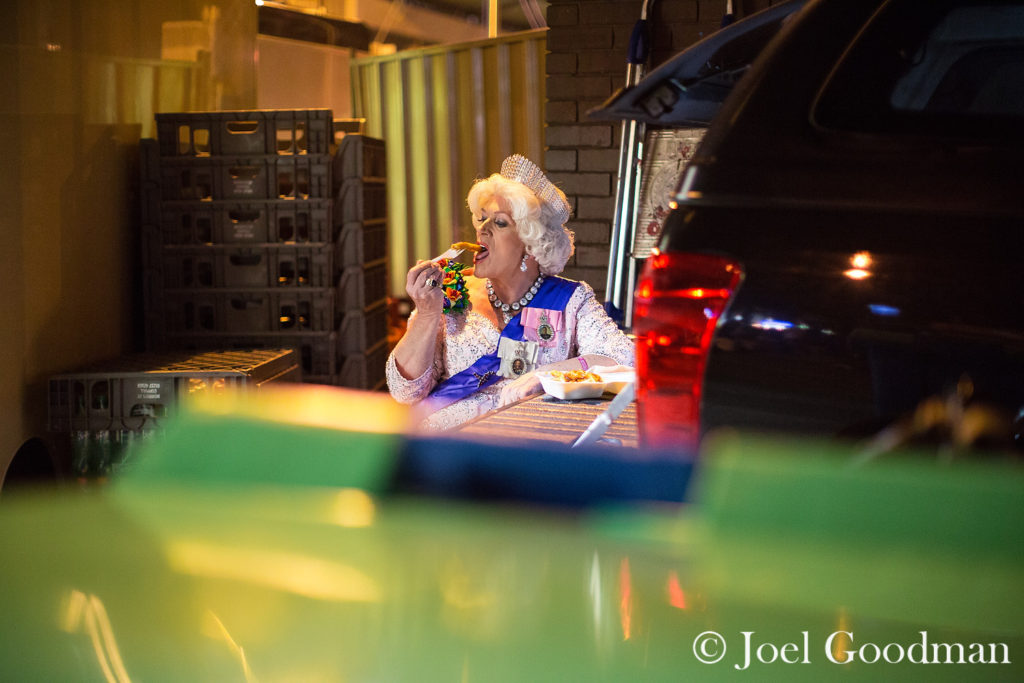 And this photo did alright: 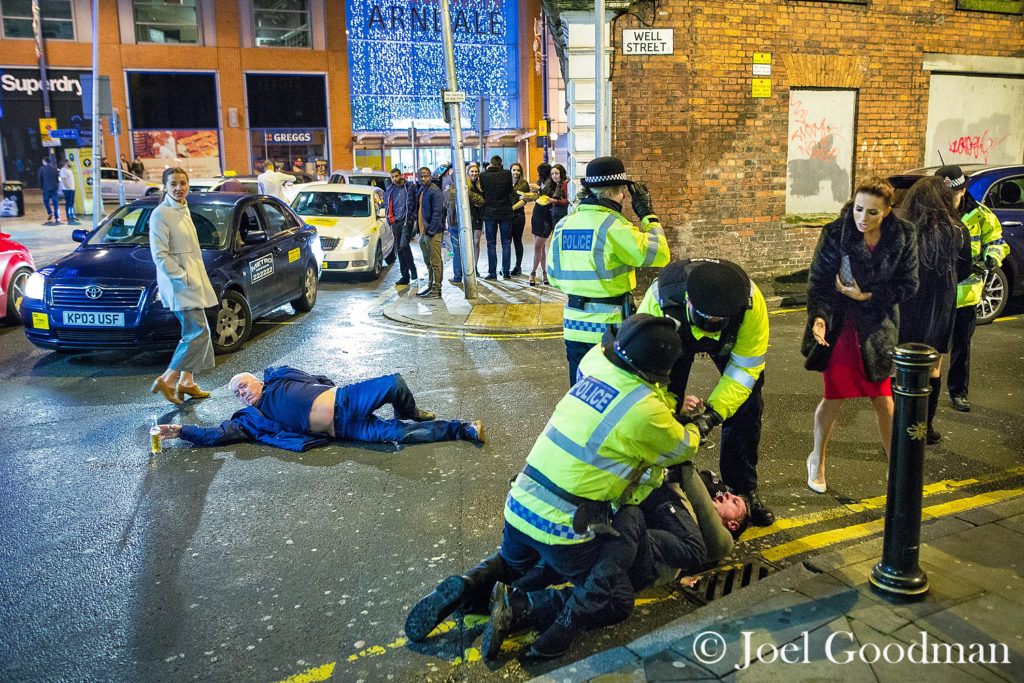 It was taken at 02:25 on the morning of January 1st 2016 (New Years Day and not – I repeat NOT – New Years Eve!) on the corner of Well Street and Dantzic Street in Manchester.
Trying out a new lens, I went back to the same spot in September and was immediately greeted by this scene: 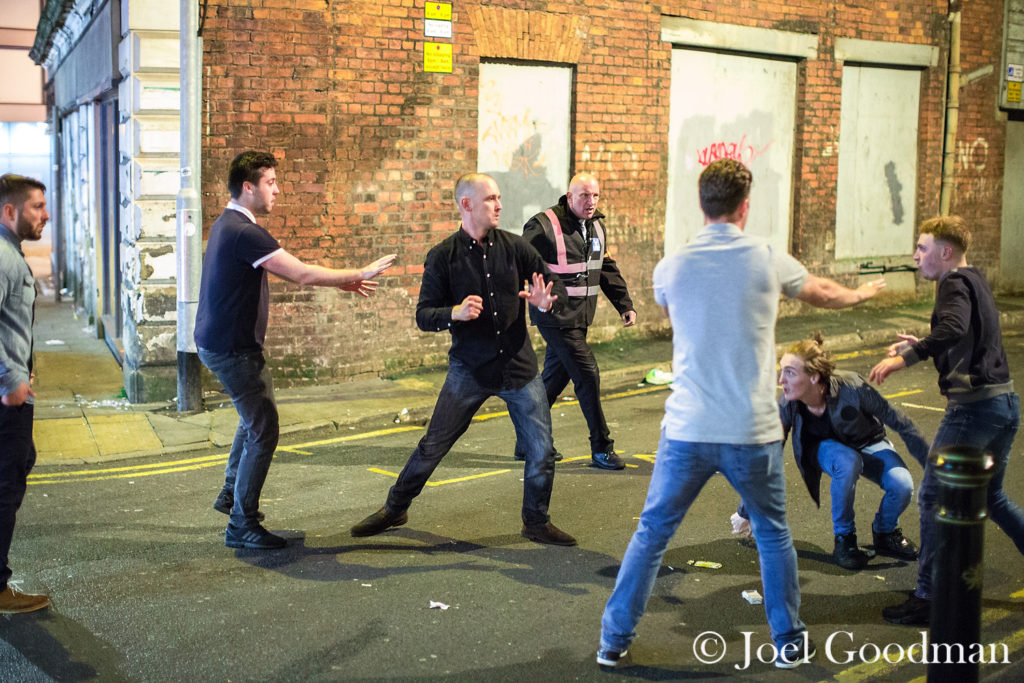 I wouldn’t have scripted it differently, and the success of the New Years Day photo brought my own personal highlight of 2016, an invitation to see the opening night of playwright Simon Stephens’ “Rage”, at the Thalia Theatre in Hamburg, a piece partly inspired by the scenes depicted in the photographs I took that New Year’s night in Manchester. 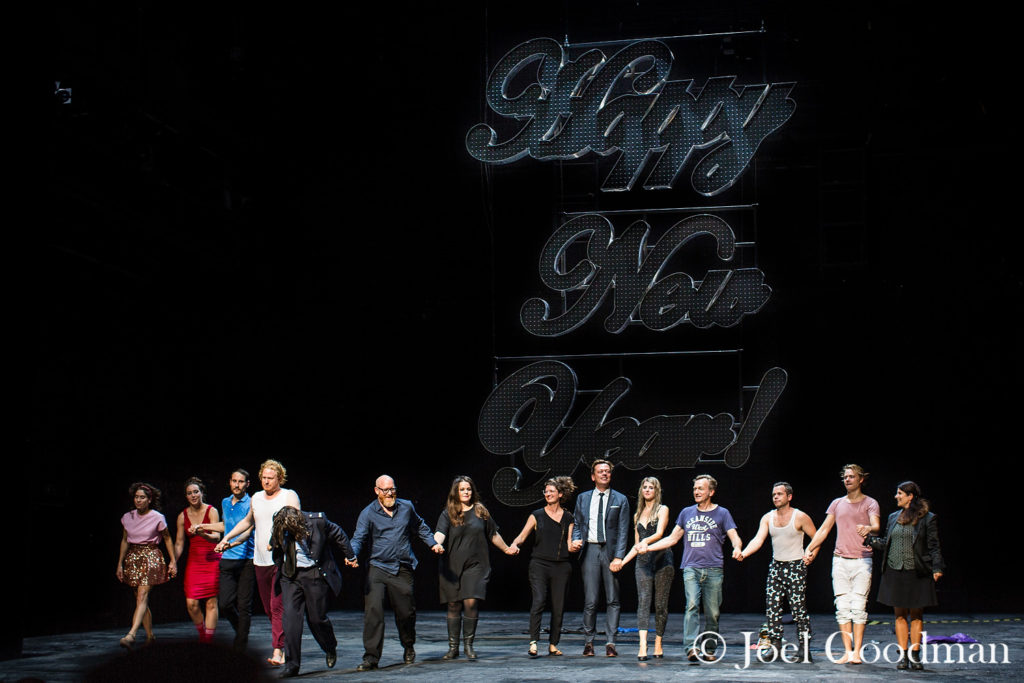 You can follow the full story of that night, from late on 31st December 2015 and the fireworks above Manchester Town Hall, to early morning on 1st January 2016, here: http://joelgoodman.photoshelter.com/gallery/01-01-2016-New-Years-Day/G0000AoNW9V4e170
Enough indulgence; I’ve probably missed out loads of good stuff, but 2017 beckons and I want to do more and better.
Further links:
Flickr: https://www.flickr.com/photos/pixel-eight/
Instagram: https://www.instagram.com/pixel8foto/