A night on the road with a paramedic 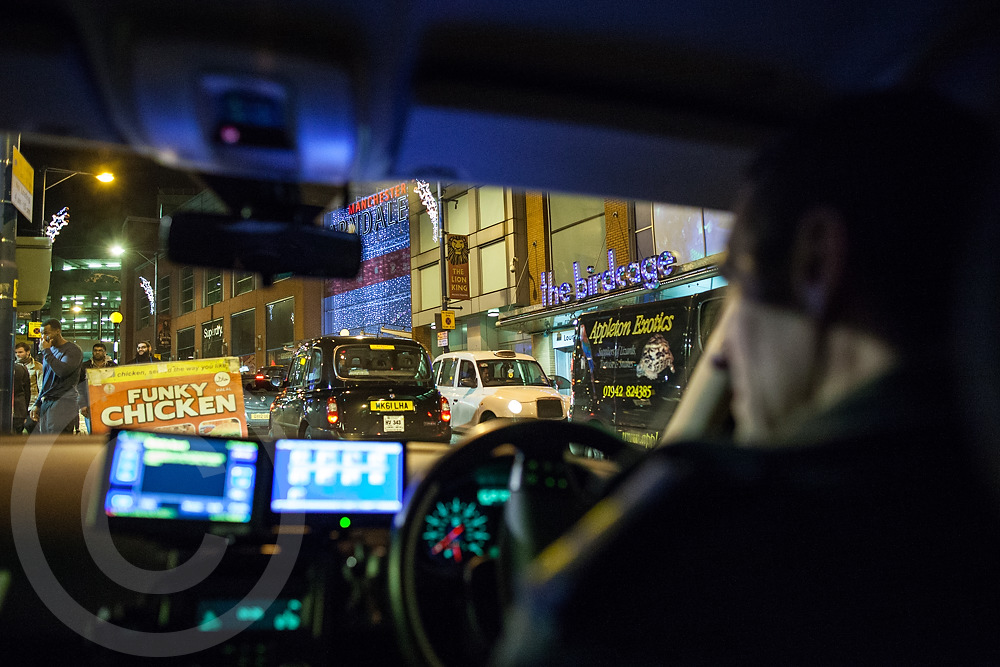 A night on the road photographing Senior Paramedic Paul O’Neill, a “First Responder” in the North West Ambulance Service (NWAS), during one of his regular twelve-hour shifts.
The situation imposed a couple of restrictions, photographically. I travelled light within the confines of Paul’s car and didn’t use flash – it looks shocking against reflective stripes, can be distracting and draws attention. This meant fast lenses, a high ISO and a slow shutter speed. It was also necessary to avoid identifying Paul’s patients in my photographs: in some situations this can be a requirement of the PCC Code. It was also a condition of my presence, imposed by the NWAS.
It’s early evening and Paul waits at one of several designated points on the edge of the city. First responders like Paul serve as the nimbler cousins to conventional ambulances and from such points Paul can efficiently reach a central or suburban location. 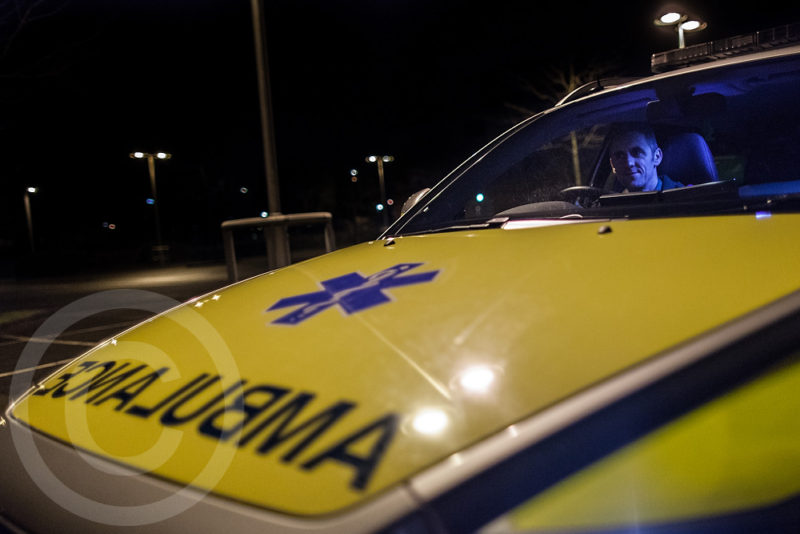 Often Paul gets called to an emergency only for the call to be downgraded or cancelled after he’s well underway. After several such calls, I find we’re on territory that’s familiar to me, on Manchester’s Withy Grove. 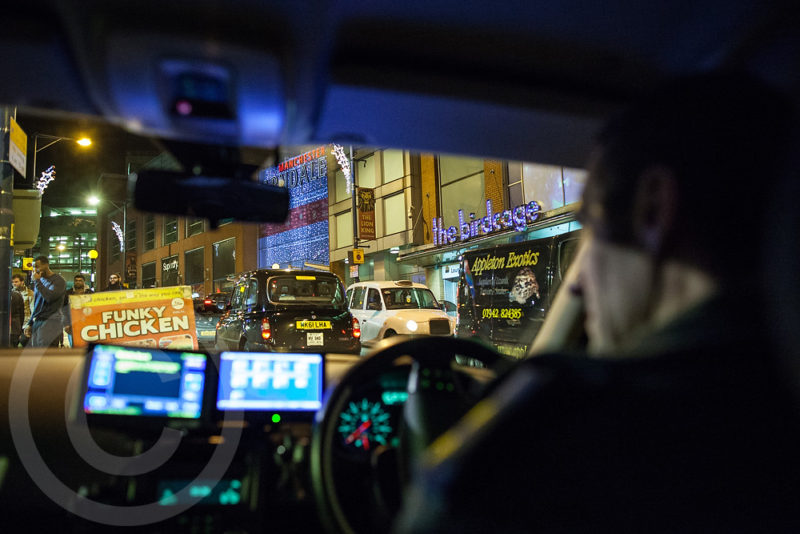 Revellers enjoy their night out as Paul works.

A pair of police, a pair of women and a pair of men: as a first responder, Paul works alone. 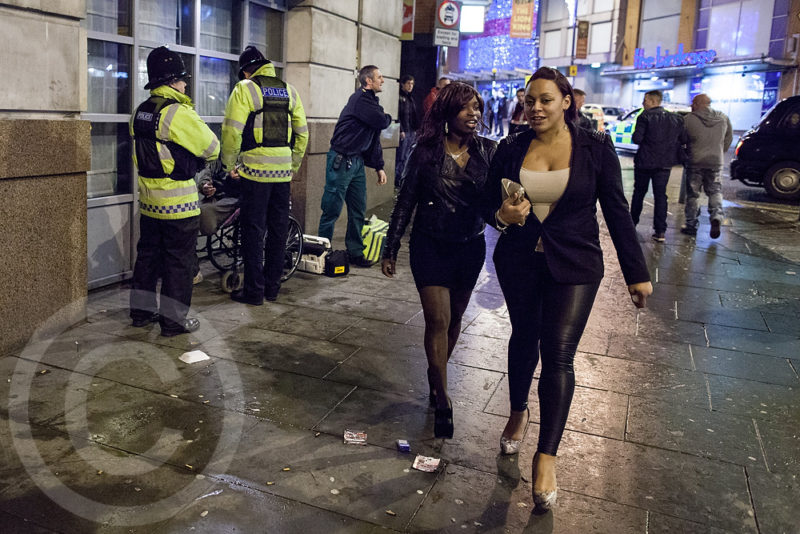 The NWAS is the largest in the country, covering 5,400 square miles and a population of over 7 million. After ensuring all is well, Paul is swiftly on his way to another call. 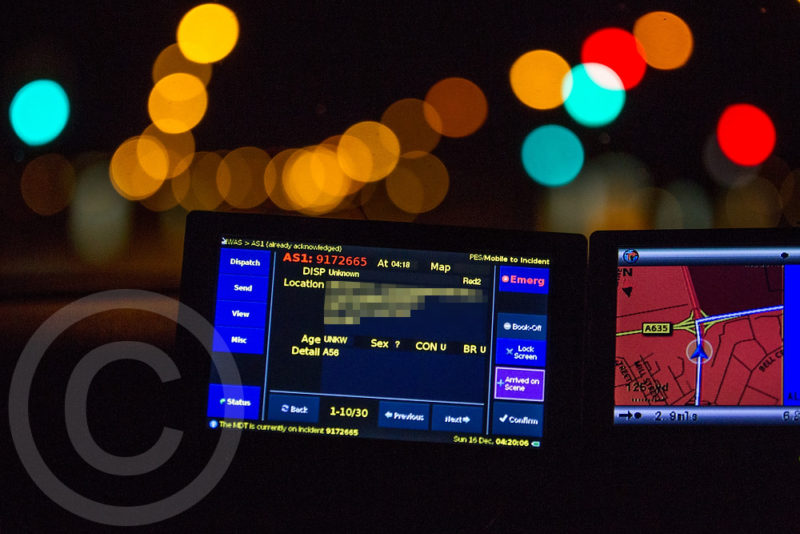 Paul uses his skill and some of the valuable equipment he carries to provide care for a woman, inside a helpful hotel in Manchester City Centre. 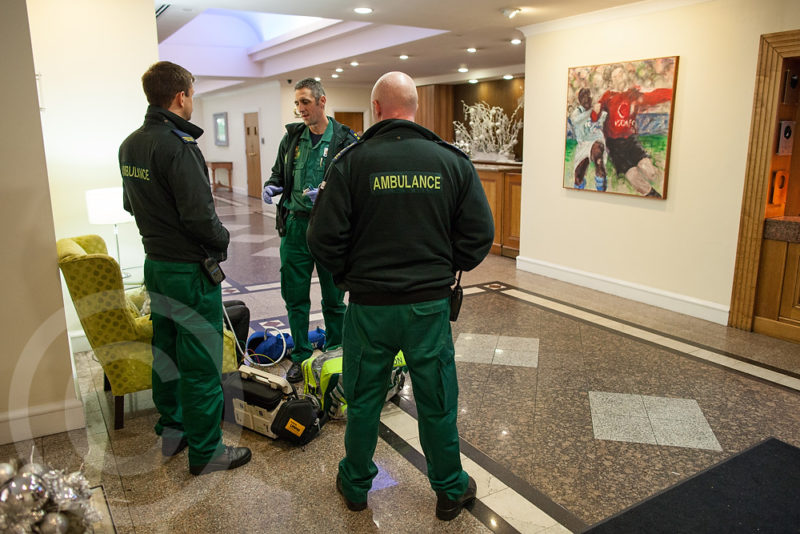 The woman is taken to hospital by ambulance and Paul gets back on the road. 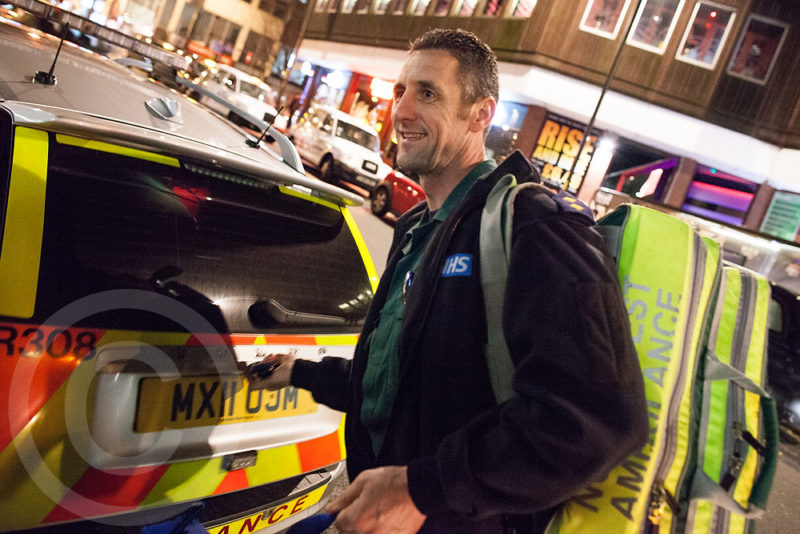 Many of the calls are inside people’s homes, so I don’t photograph those. To my untrained eye, these range from ridiculous to serious. Every incident calls for an emergency response from Paul, who drives at speed, sometimes taking personal risks to ensure support is provided. Every incident gets treated with the same level of care and attention.
After a few hours, it’s time for a break back at the NWAS Central Manchester Hub.
During his break, Paramedic Paul Gay cleans his ambulance 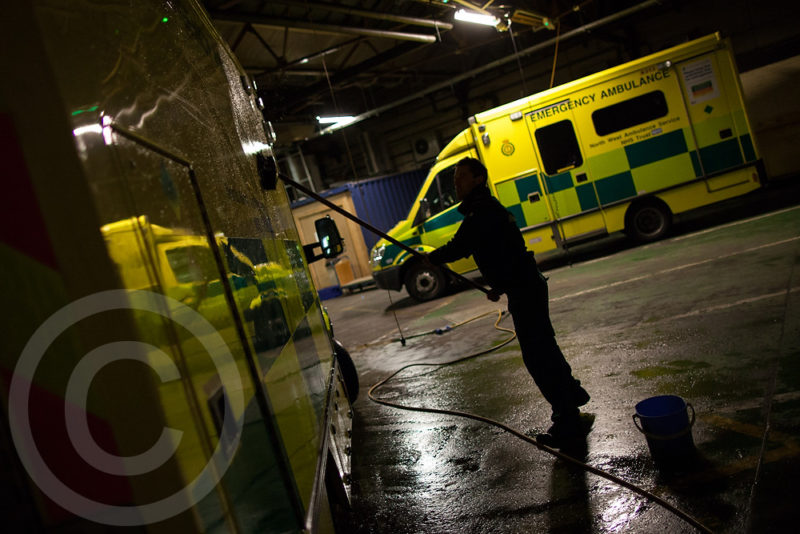 In to the early hours, Paul responds after a man is found injured in the middle of the road in Moss Side. 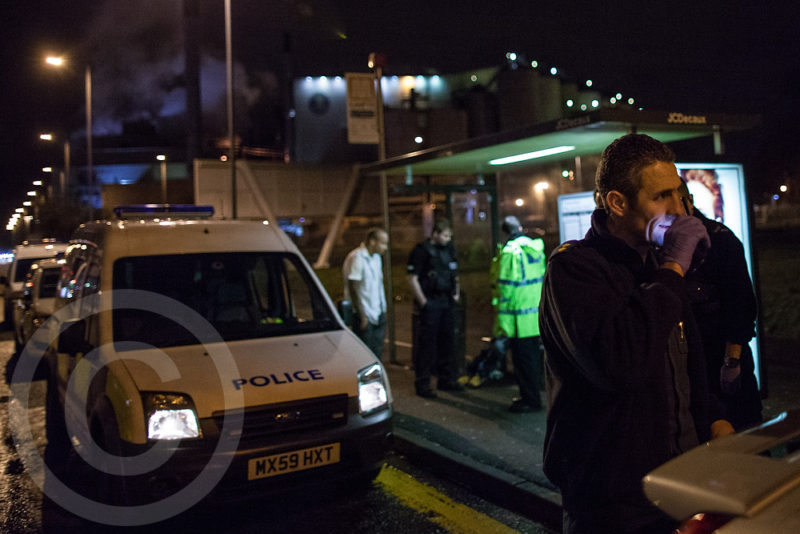 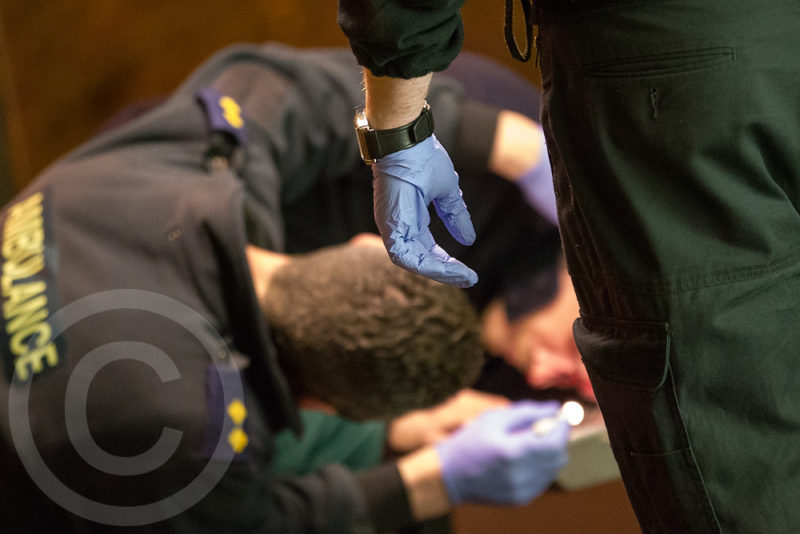 A passer by had spotted the man in the road and checked to see if he was OK. When he realised he was injured he called the emergency services. 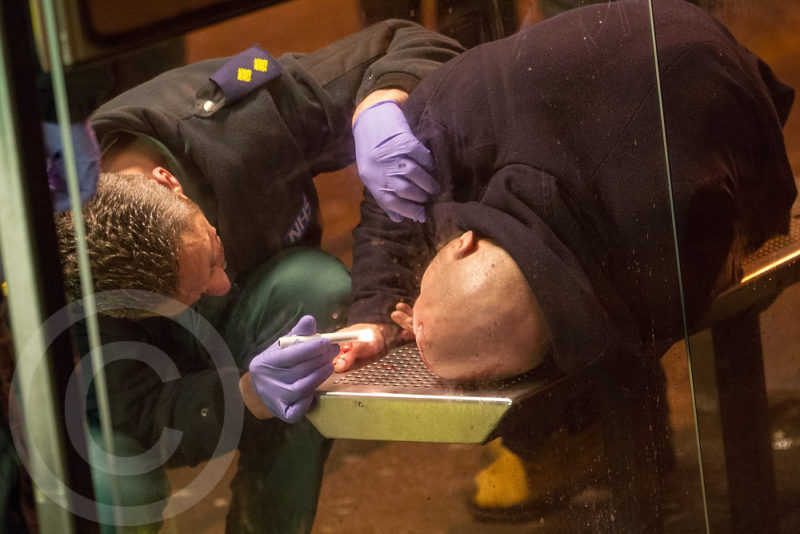 The injured man needs further care and is secured to a stretcher before being loaded on to an ambulance. 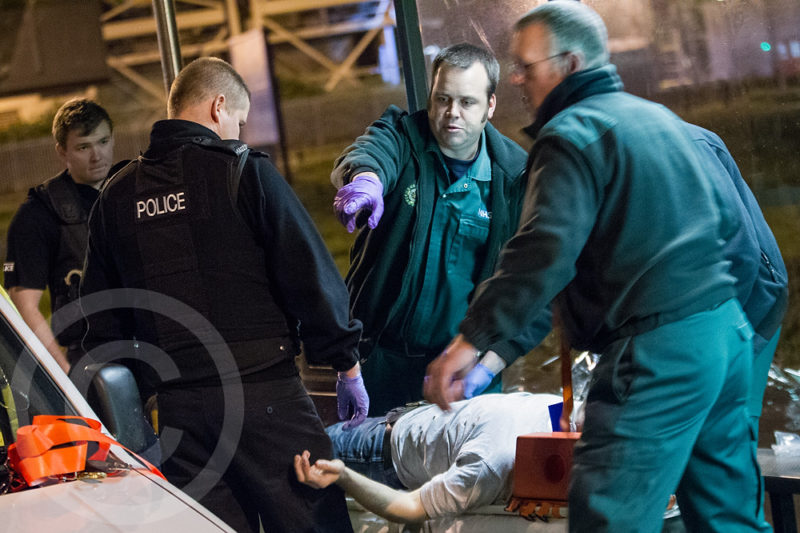 Paul checks on his welfare before he finishes at the scene… 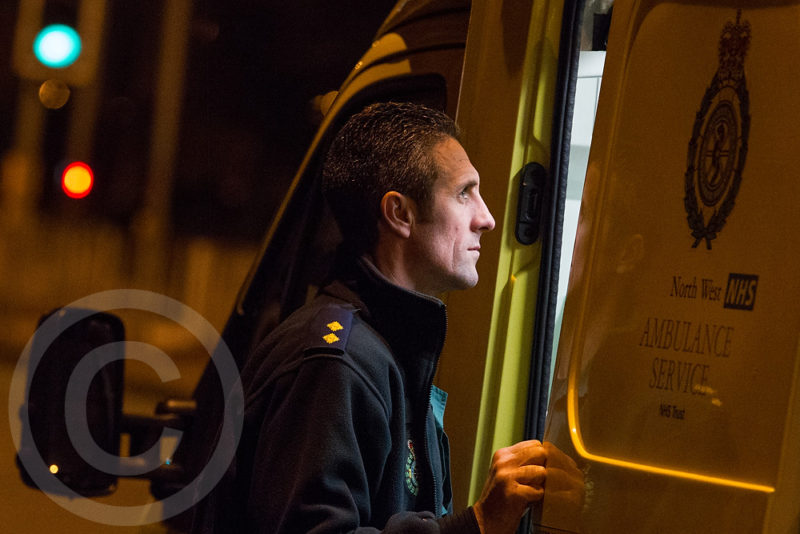 …and fills out the necessary paperwork 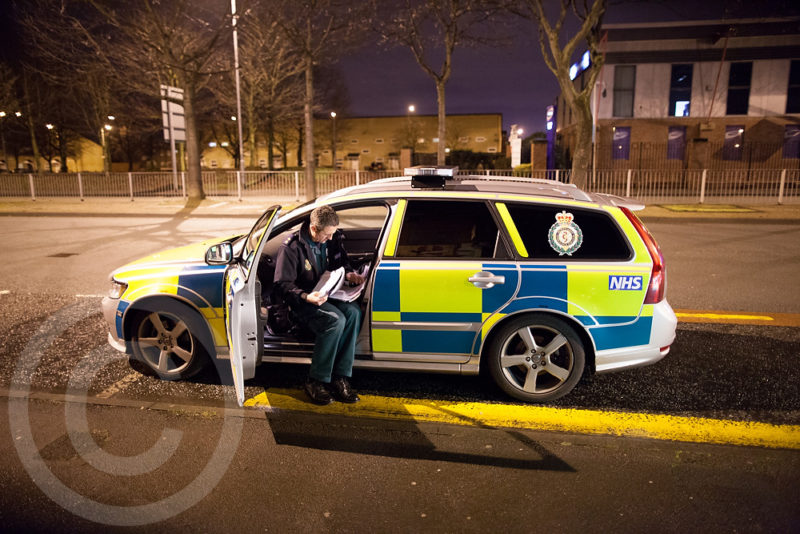 Police give the passer by a lift home to thank him for helping, whilst the injured man is taken to hospital. 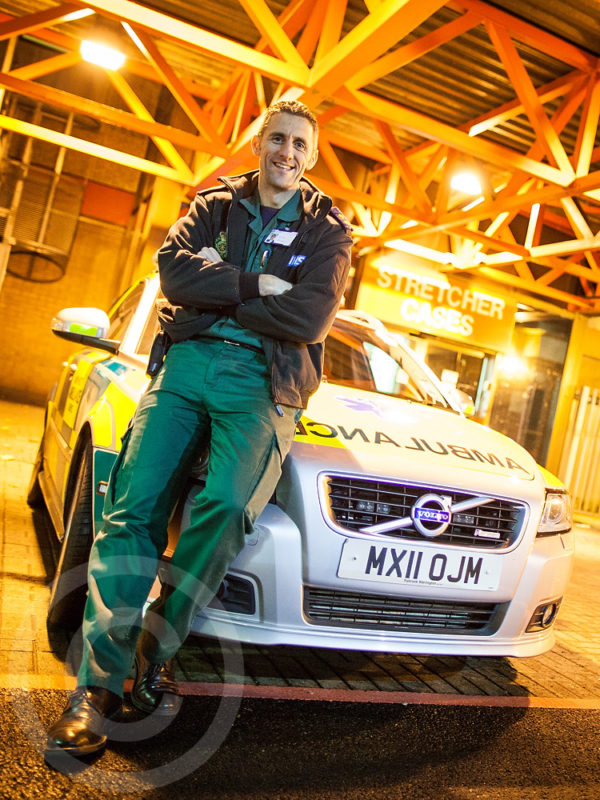 And at the close of his twelve-hour shift, Paul gives me 30 seconds for a quick pose.