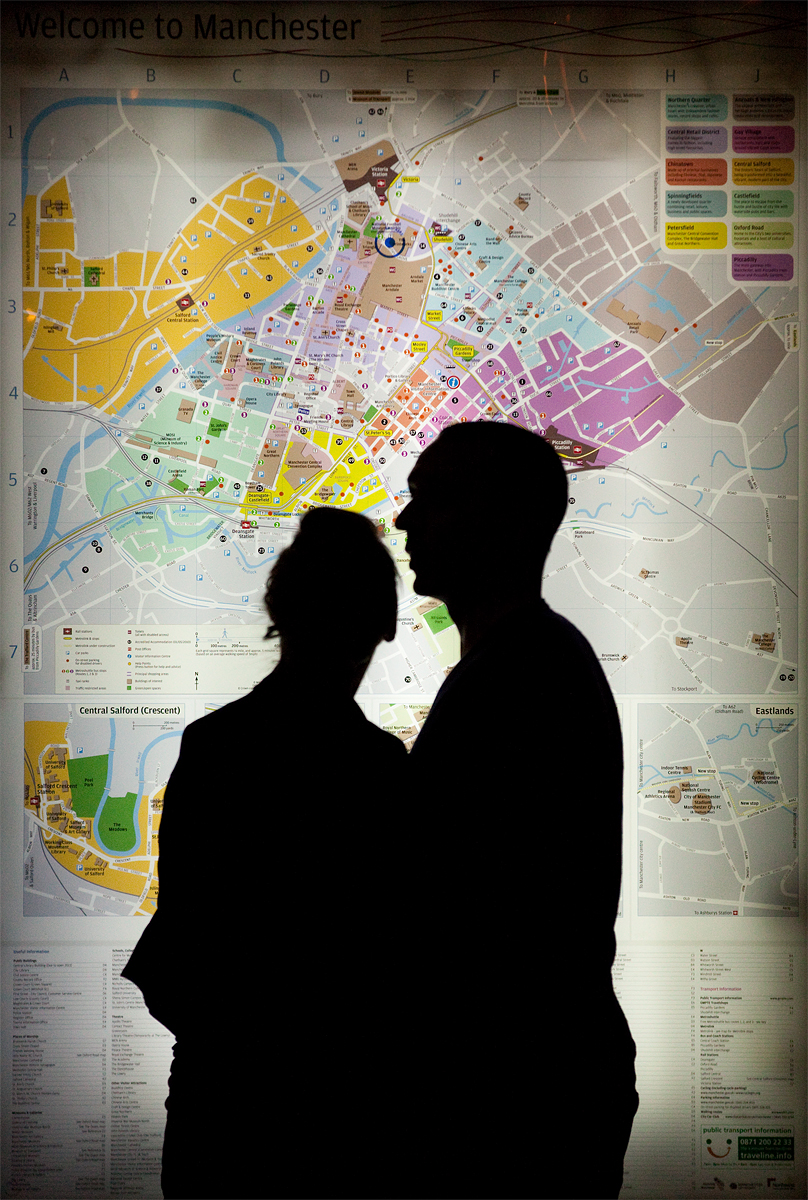 The brief: to photograph in Manchester, non-stop, for 12 hours, starting at 2pm Saturday and finishing at 2am Sunday. The format: street photography. The goal: to select one good photo from each hour.
This is my first draft selection, from which I’ve got to select a final 12. Some hours were, inevitably, more fruitful than others. It was a long day, not least because I’d come straight from a job in Stockport, so had already been going a couple of hours. This was going to test my mettle!
2pm: The perfect start to the day; the wind picked up and it started raining. This is Summer in Manchester, of course. 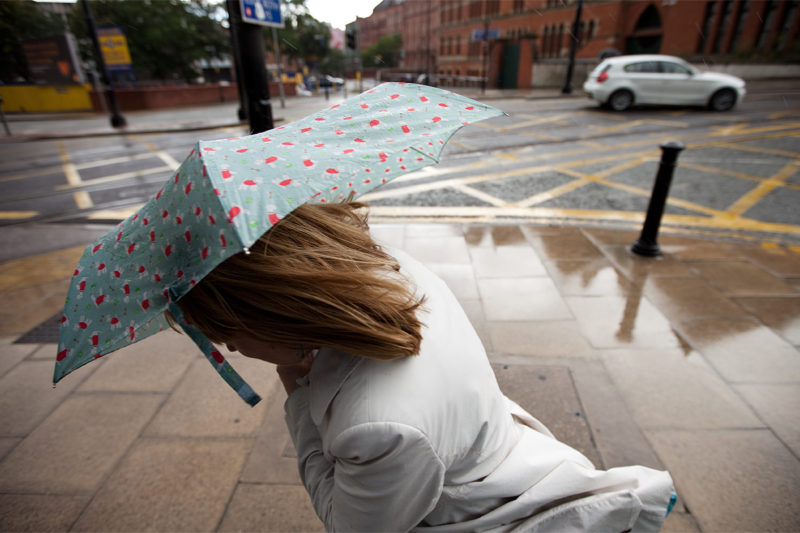 I headed out with my 5Dii and a 16-35mm lens. I then learned (late) that there were a couple of demos taking place in Manchester’s Piccadilly Gardens, so returned to my car and grabbed my full kit, which meant extra body, telephoto, flash, back-pack and belt.
3pm: someone was doing some sort of burlesque-style shoot in the fountains in Piccadilly Gardens. Kids were playing in the water – it made for a fun photographic combination: 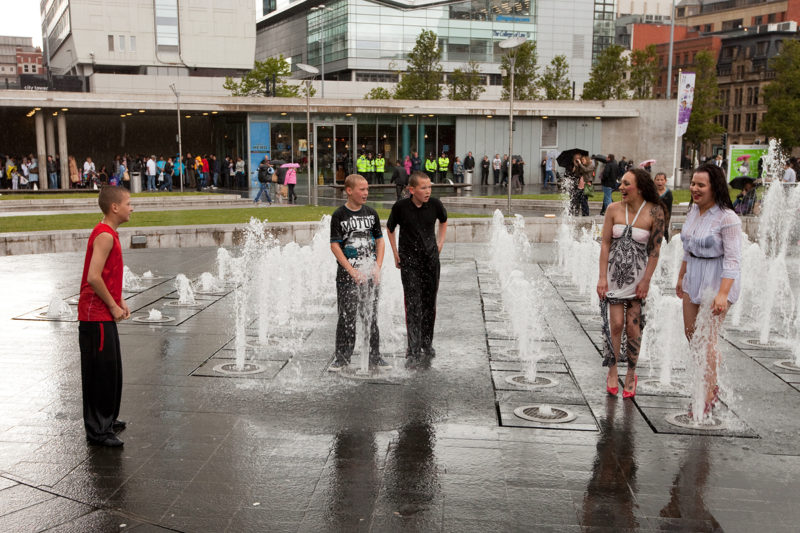 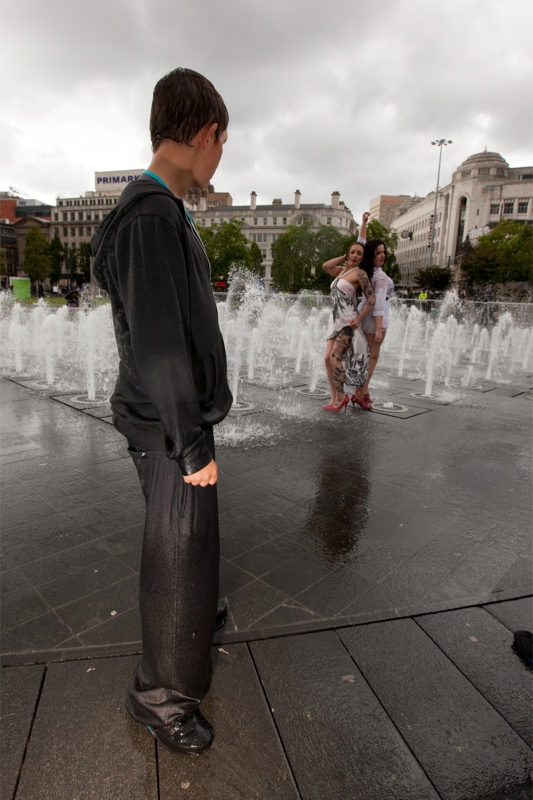 4pm: With two camera bodies out, I enjoyed the luxury of switching between telephoto and wide lenses. Not typical street-photography style, but it’s what I was wearing. One of the protests was billed as an anti-Islamophobia demo. The protest attracted a wide range of groups and was more heavily policed than would be typical, after another group stated their intent to hold an unannounced counter-protest, at the same time: 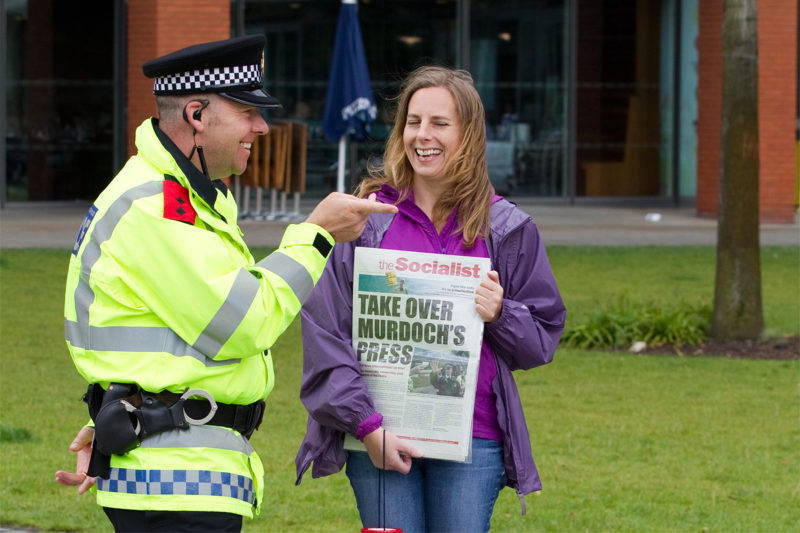 5pm: I don’t do many portraits, and I guess this isn’t really “street photography”, but these lads seemed friendly enough: 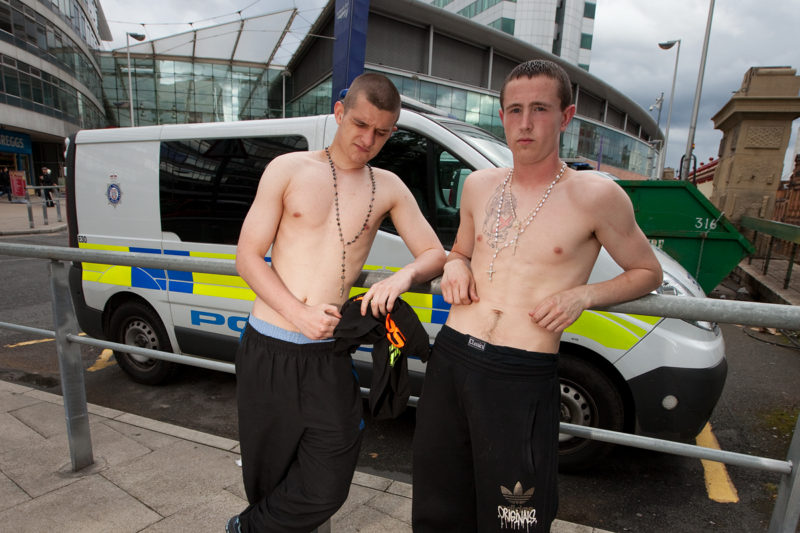 Probably fed up with the weather: 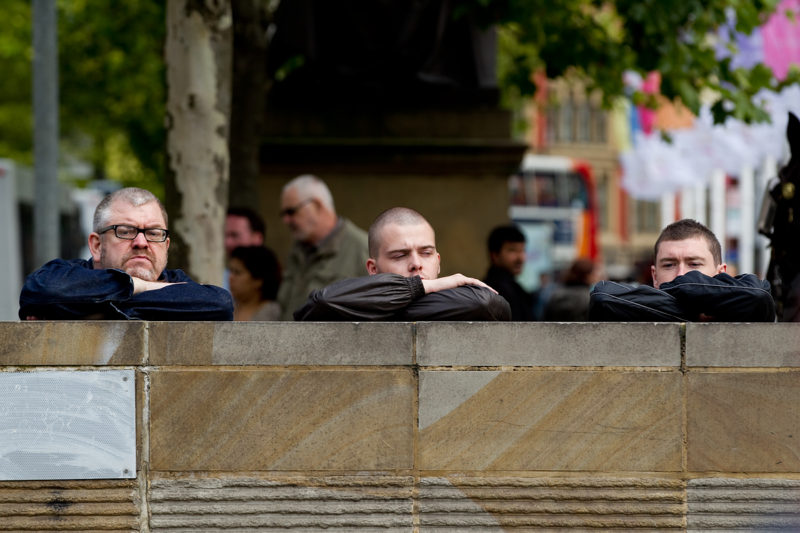 6pm: I finally put some of that heavy gear away and returned to shooting only wide: 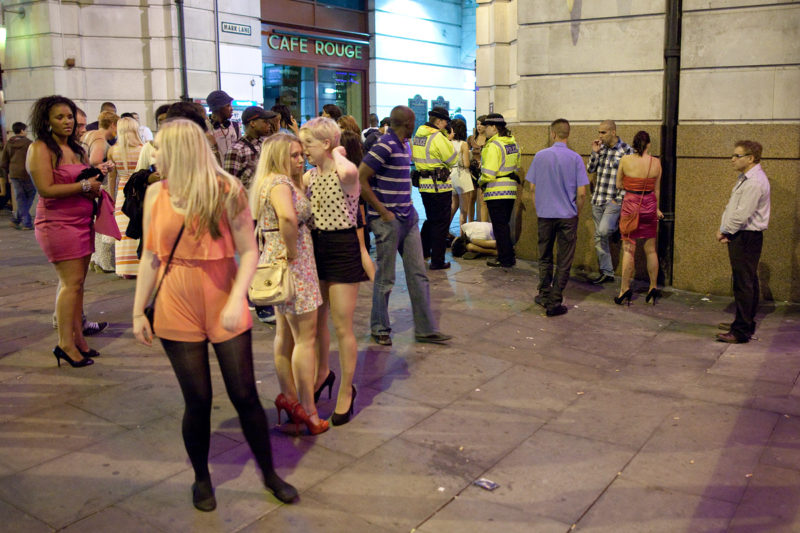 The sunshine returned and I discovered this “no-flash corner”. A no-flash corner is a spot where, when the sun is just right (low and strong) and it’s lined up such that its light is reflected off the glass of a building, you get some cool, natural lighting. I like the way, in the left side of the picture, the sun’s direct light causes the cycle’s shadow to fall away from my position, whilst in the right side, the sun’s reflected light causes the other cycle’s shadow to fall towards me: 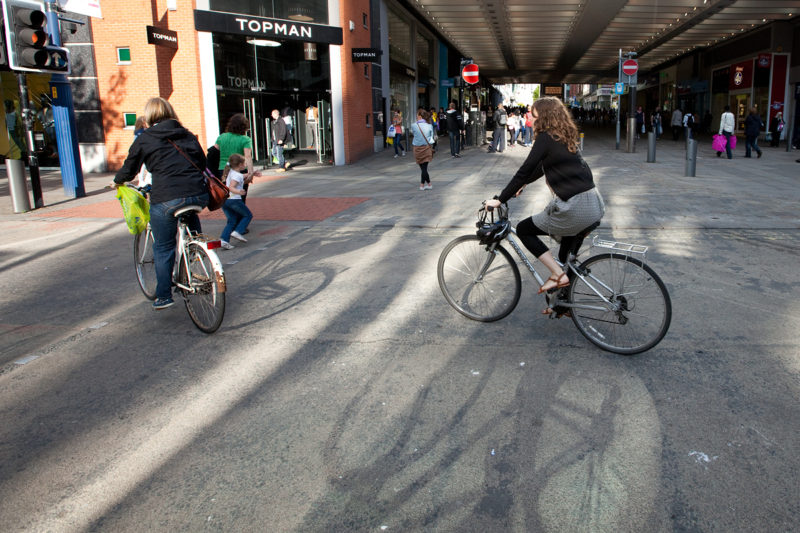 7pm: dinner time. I met up with a friend at Fu’s in China Town. I was ravenous.Â  A big bowl of Won Tun Soup 🙂 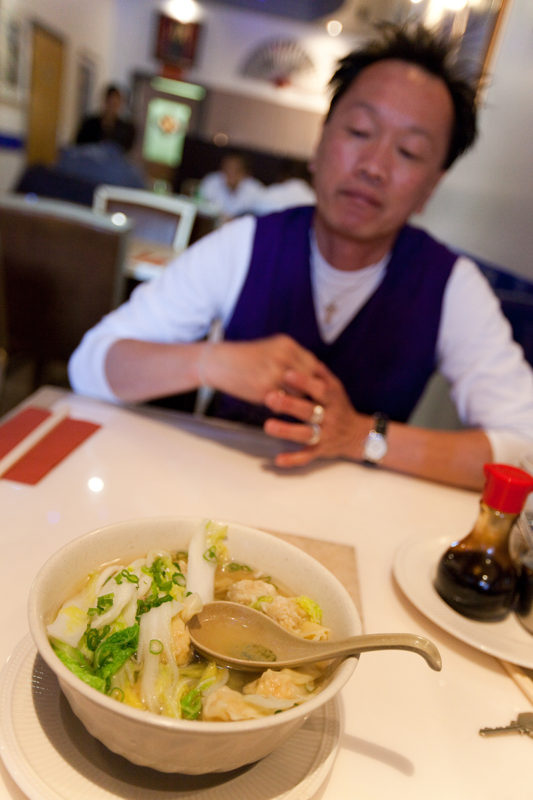 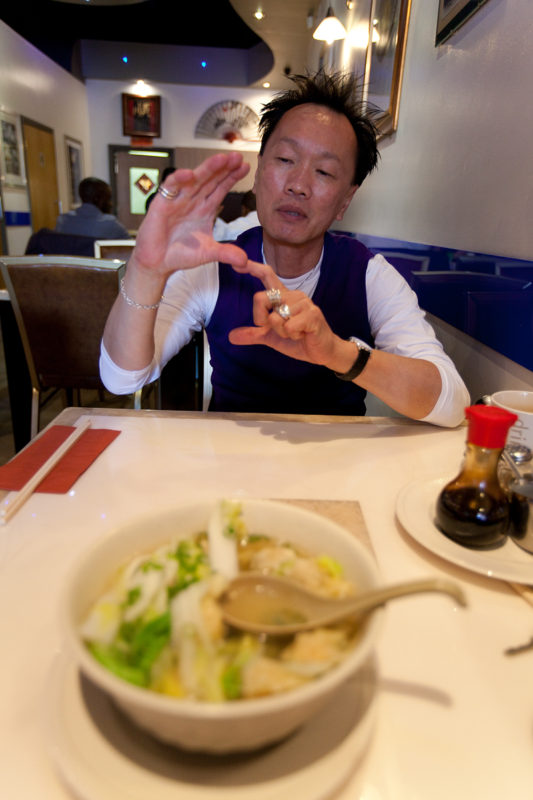 8pm: wondering back through Manchester, I bumped in to a friendly face and got chatting. A friend of his appeared and I just *had* to get a portrait: 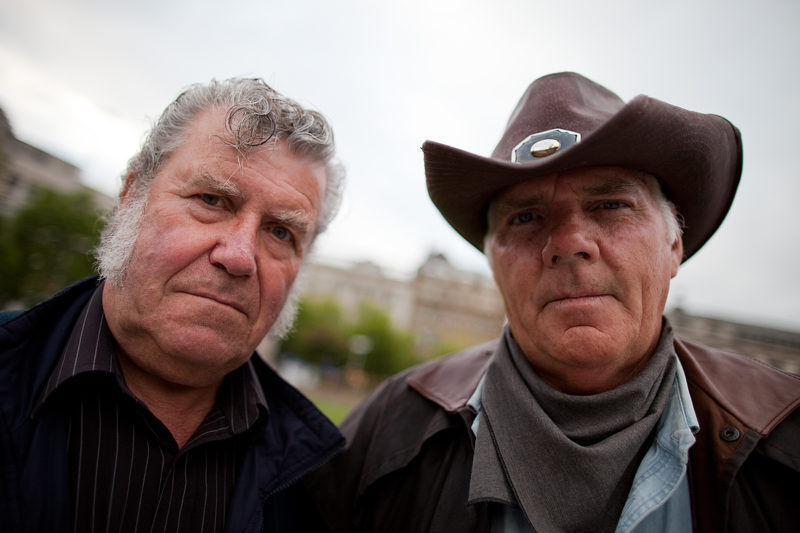 Tony the Ted (left) and Two Gun Tex (right). Shot at 24mm @ f1.4
I actually prefer this one, snatched after I’d done the posed shot, rather than the moody one above – it’s natural and fun – they were great guys, loads of fun: 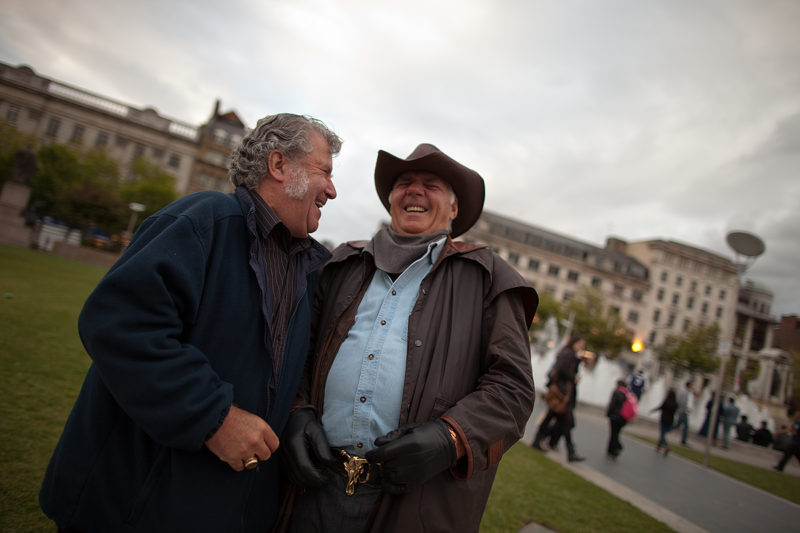 9pm: This is one of the hours when I wasn’t happy with any of the shots, but the rules are a shot from each hour, so here you go. Takeaway chicken, just warming up for the Saturday night crowd. Bright colours, a couple of couples and a man cramped in the corner: 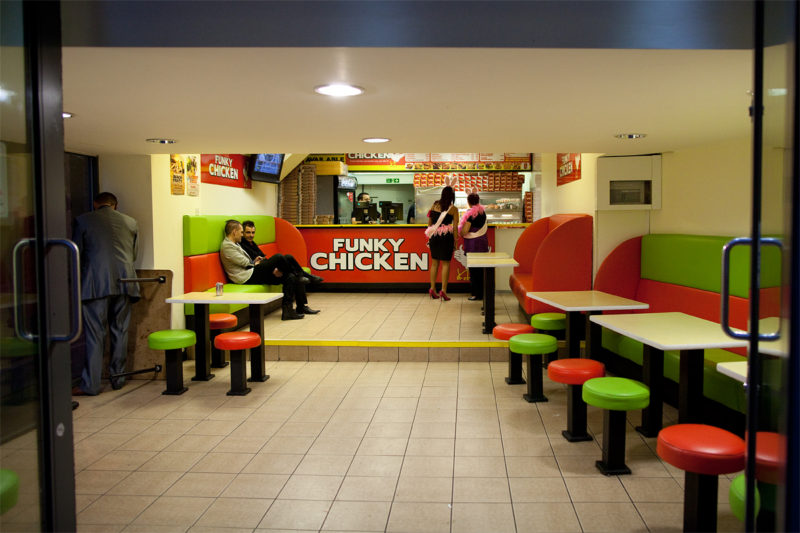 10pm: people are hitting the streets for a night out. Hen parties and fancy dress, all in good fun. Local shopkeepers in Piccadilly have a laugh with their customers as others look on: 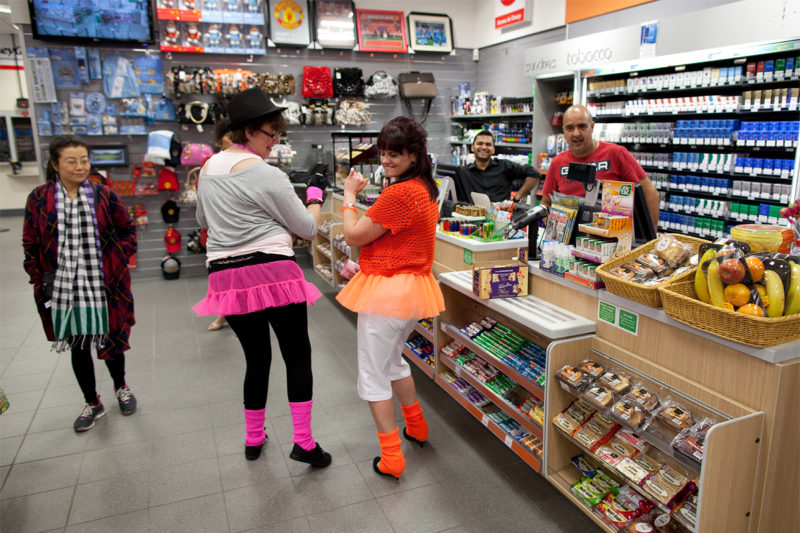 Meanwhile, over on Canal Street, in Manchester’s Gay Village, there’s a bit of a fight going on: 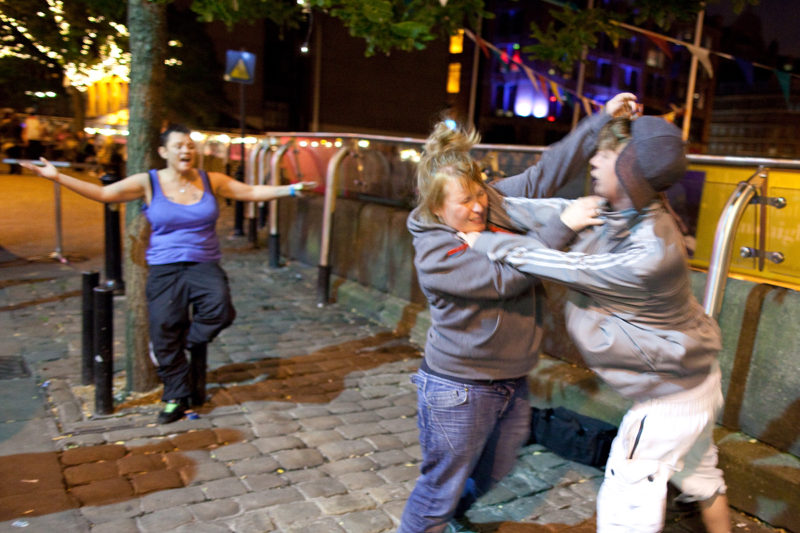 I should’ve been more steady with this one – I’ll have to reject it on quality grounds.
I switched back to the telephoto for a while, just for the kicks. Canal Street was looking busy: 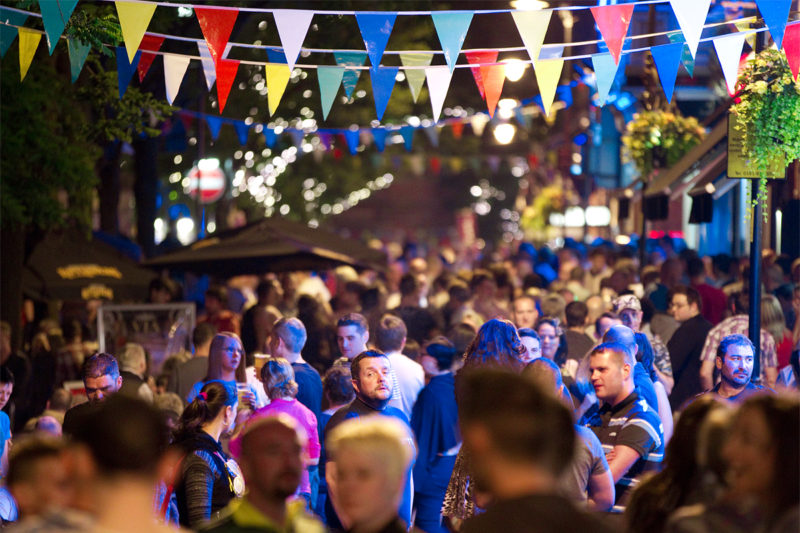 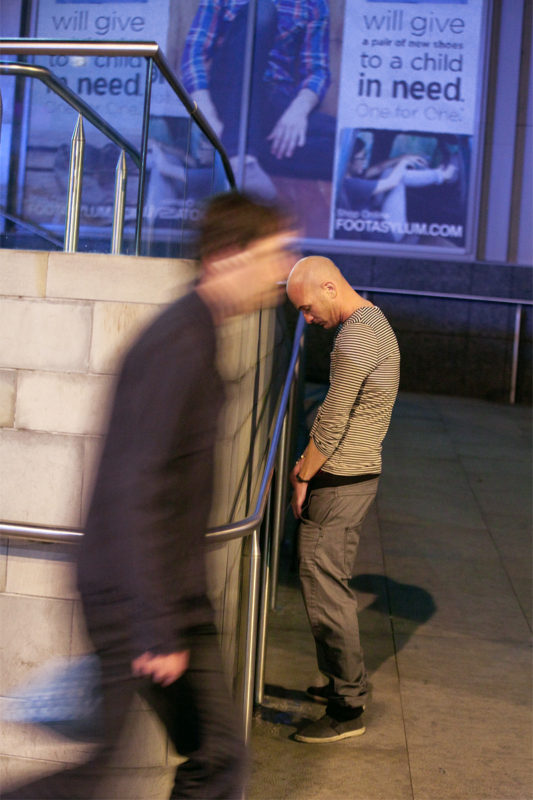 Manchester’s quite a compact city – lots of diverse attractions within close proximity. Not that my legs weren’t telling me otherwise – I’d been on my feet for nearly 12 hours and was starting to flag… 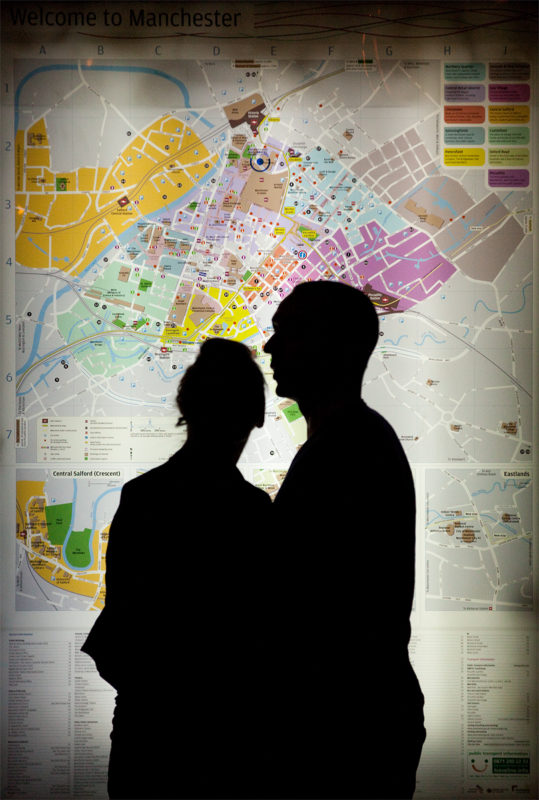 Midnight: As the night wore on, a typical sighting: someone collapsed on the ground, as others mill around them. The police watched over:

I have this, tighter shot. It’s bolder, less subtle, but less atmospheric too: 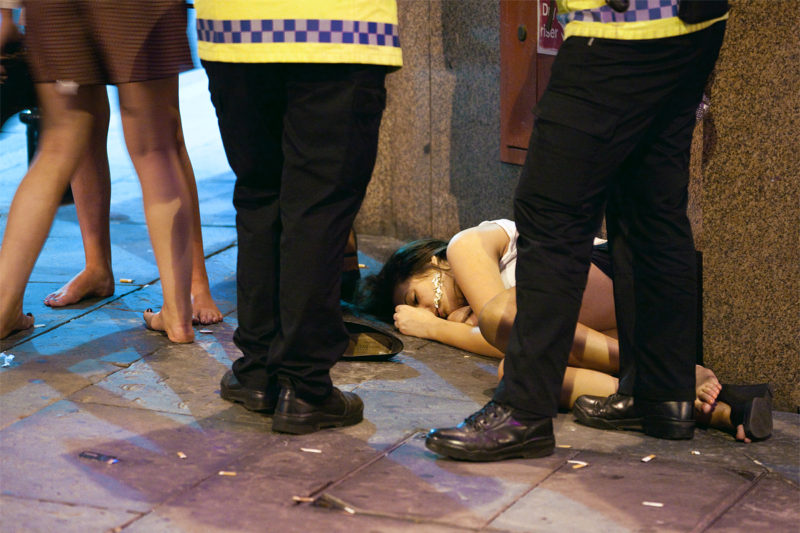 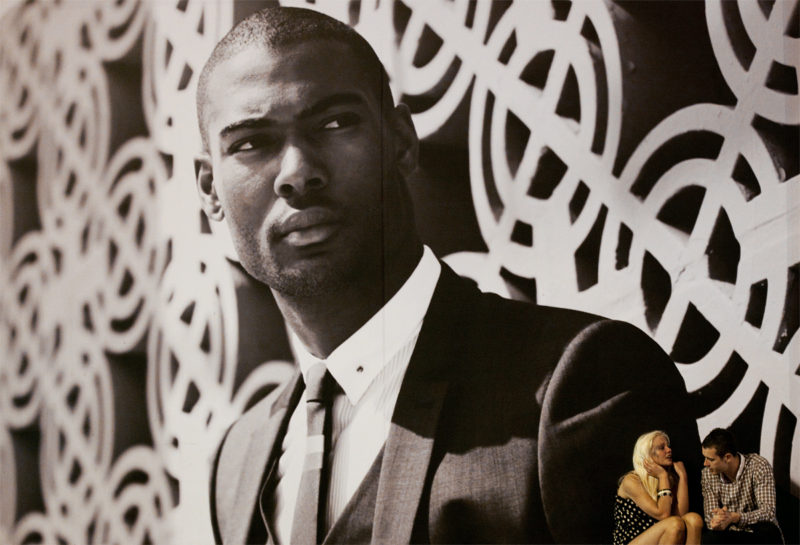 Many people on a night out use drugs to extend or enhance the evening: 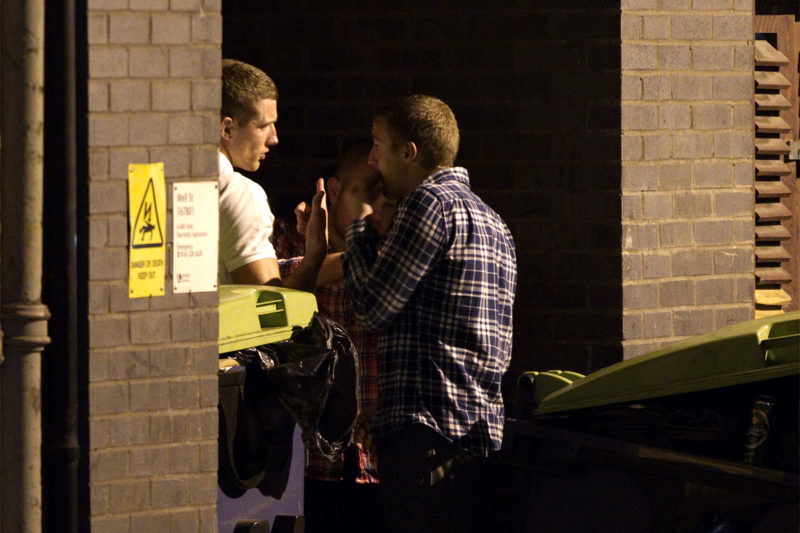 1am: another peeing in public shot. I think I’ll drop this one from the final edit:

And then, of course, the rain returned. If nothing else, it would’ve washed away some of the urine. Not everyone was prepared for the sudden downpour. Getting the colours good under the conflicting artificial lights of night can be tough. I’m not totally happy with the colour here: 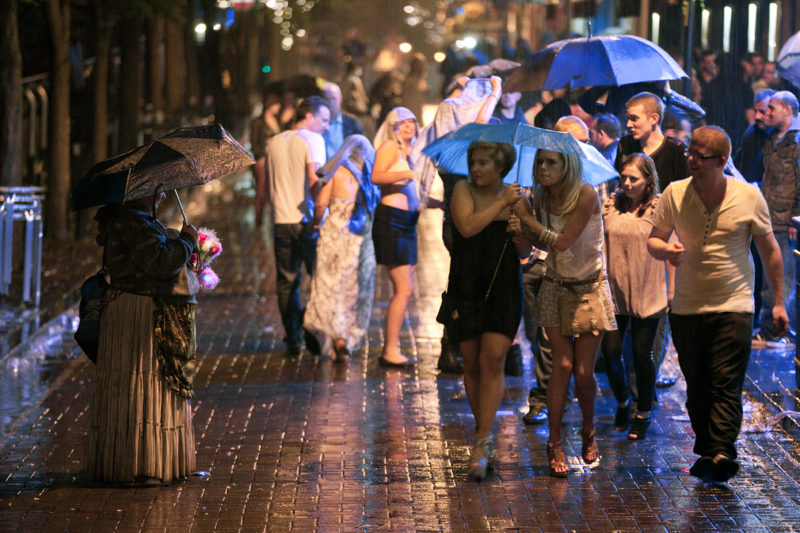 A symbolic finally: waiting for a friend? A lift home? Abandoned in the rain? 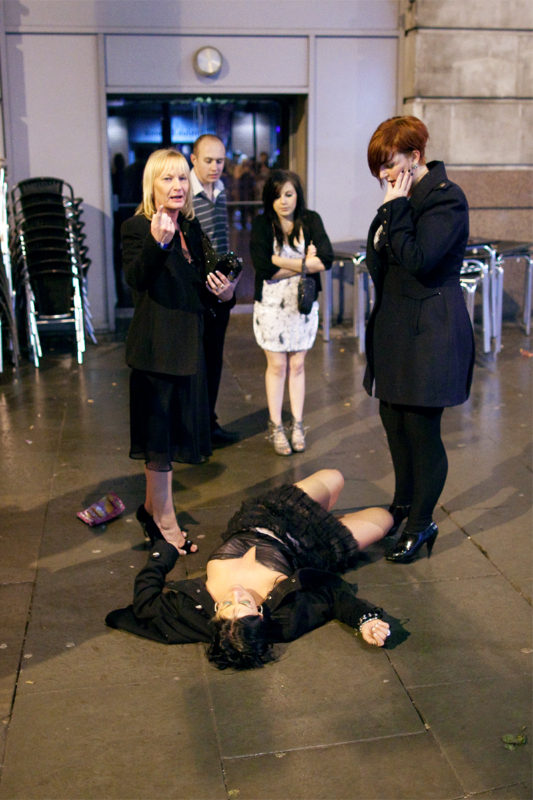