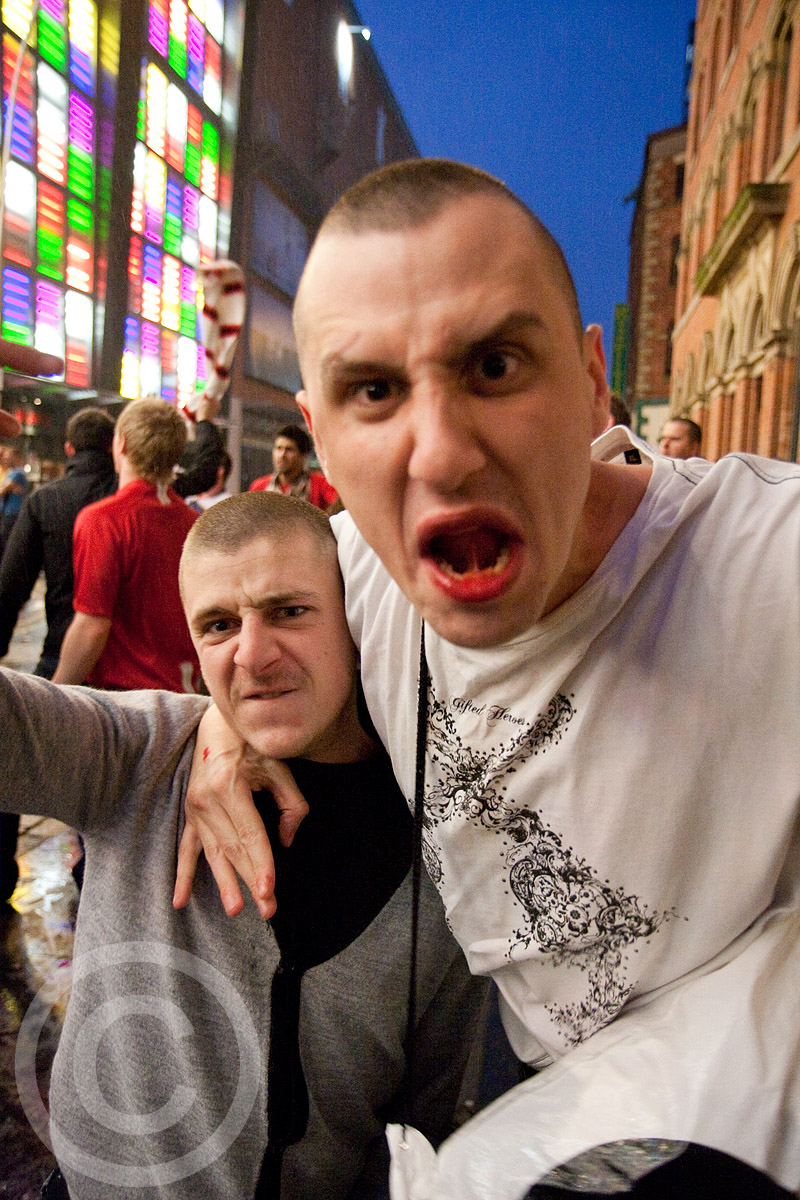 Something someone said recently made me think about 27th May 2009. It was a day that I learned something profound and devastating. In the evening I went out and took some photographs and started to get over it. It was an important day in driving my determination to improve as a photographer.
Manchester United were playing Barcelona in the UEFA Champions’ League Final against Rome, in Italy. I was in Manchester, so headed out to photograph the fans.
Ahead of the match, fans were in a jubilant mood 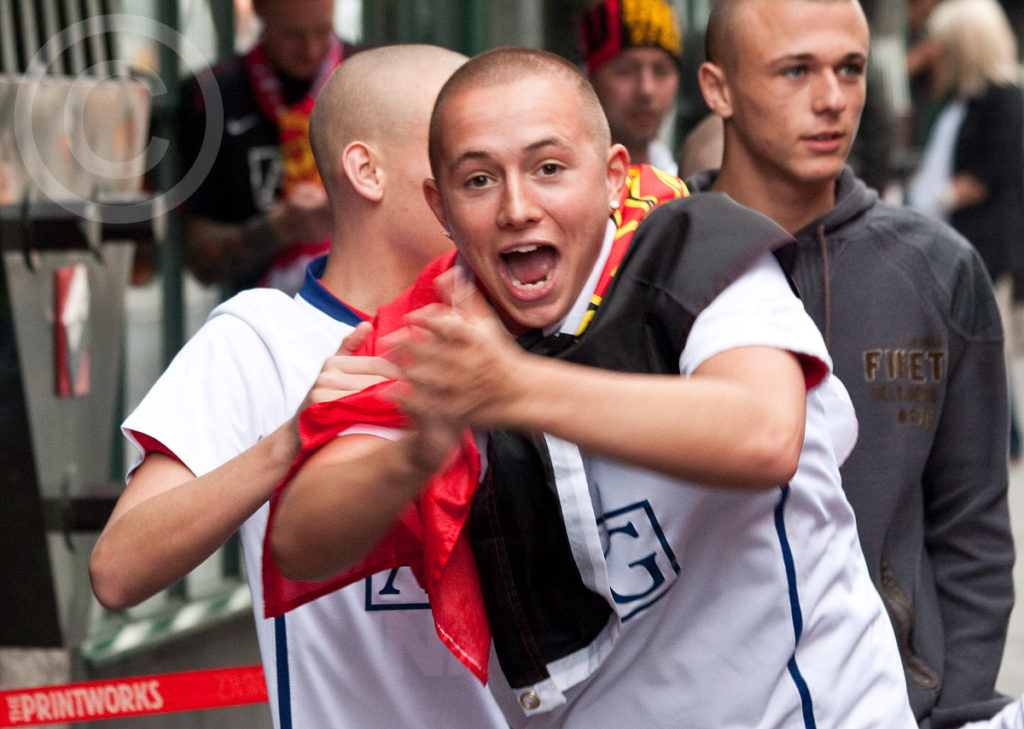 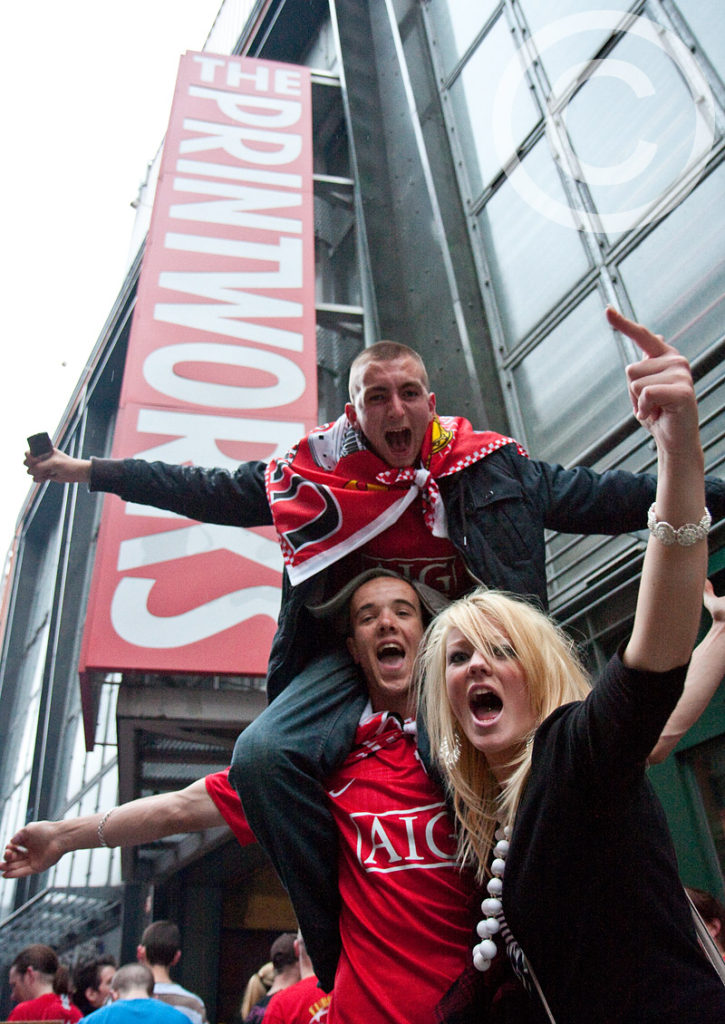 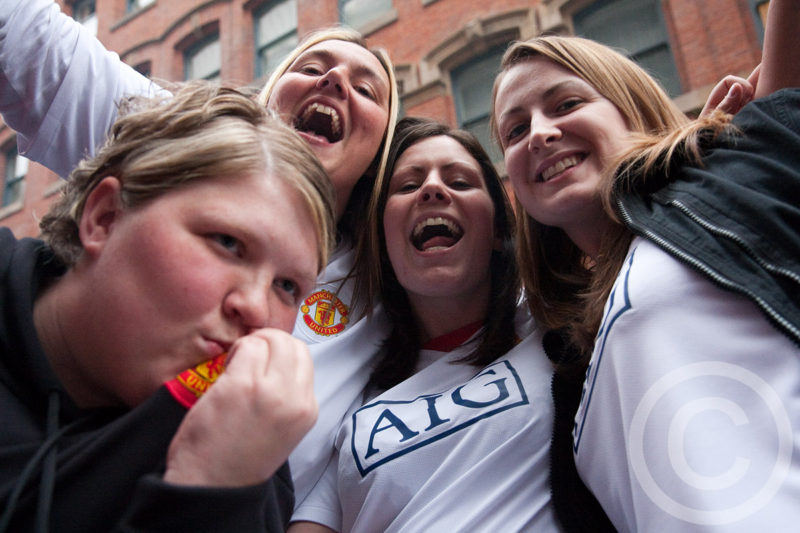 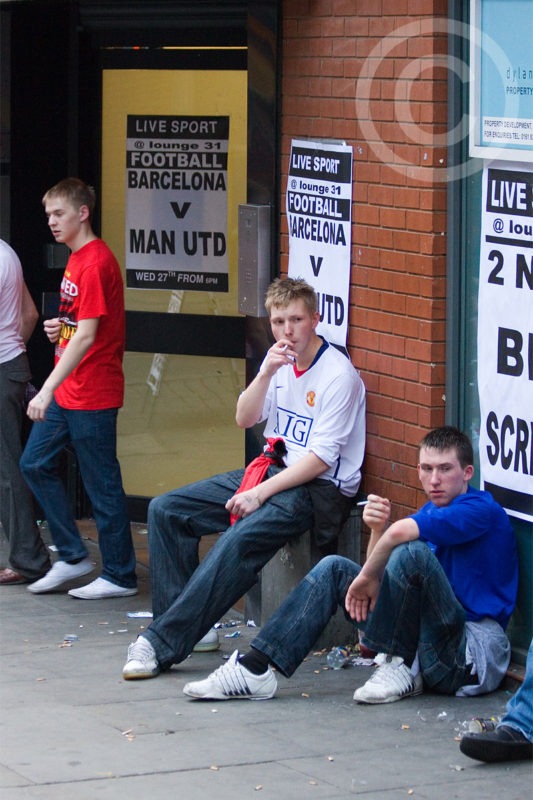 As the pubs filled, eager fans watched through windows 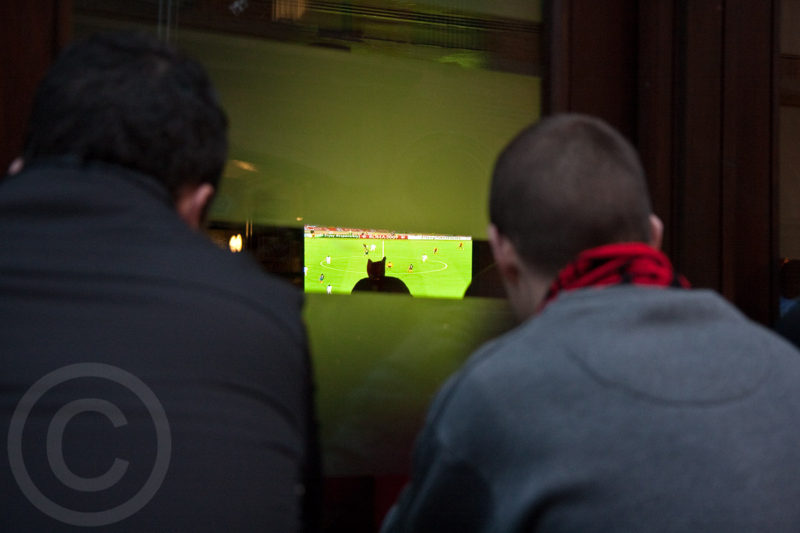 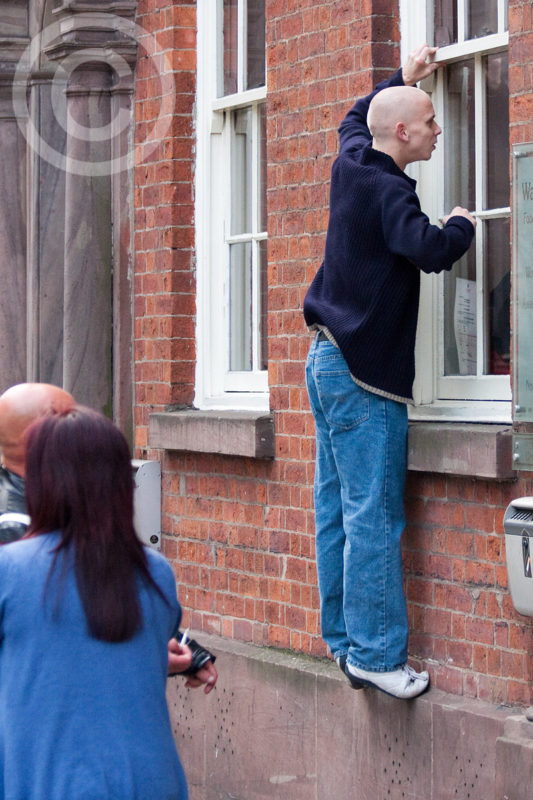 but the Italian side won and, as the 2nd half came to a close, sad fans emerged 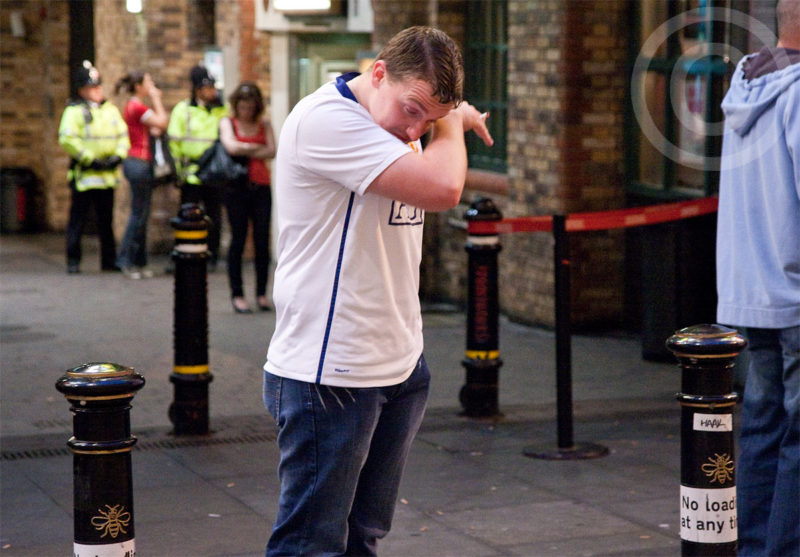 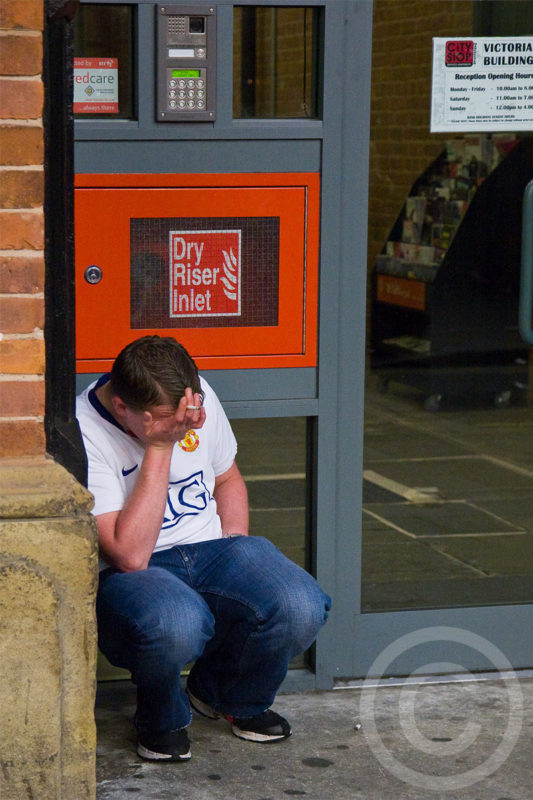 I’m grateful I used Canon’s RAW format. My cameras weren’t the best in 2009 and this was most evident in low light. I under-exposed shots in order to keep the shutter speed up. Processing these pictures today, I’ve increased the exposure by up to 2 stops and corrected the colour. RAW enables this kind of post-production with less loss. 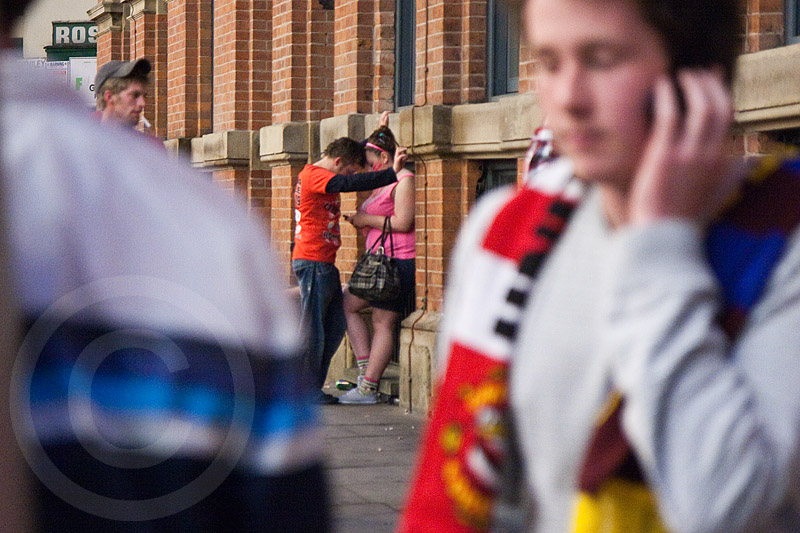 Numbers on the streets increased. It started raining and a surprising wave of jubilation spread through the fans’ ranks 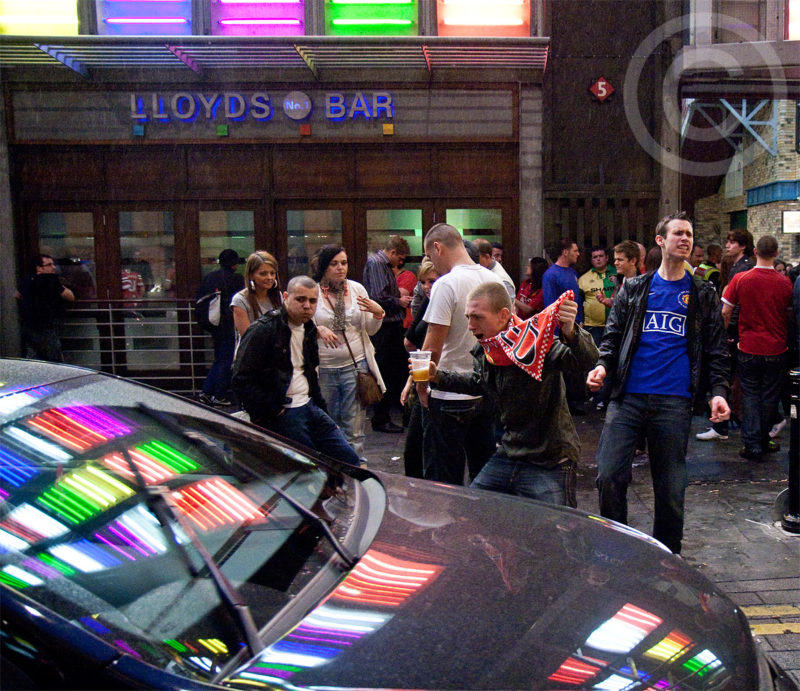 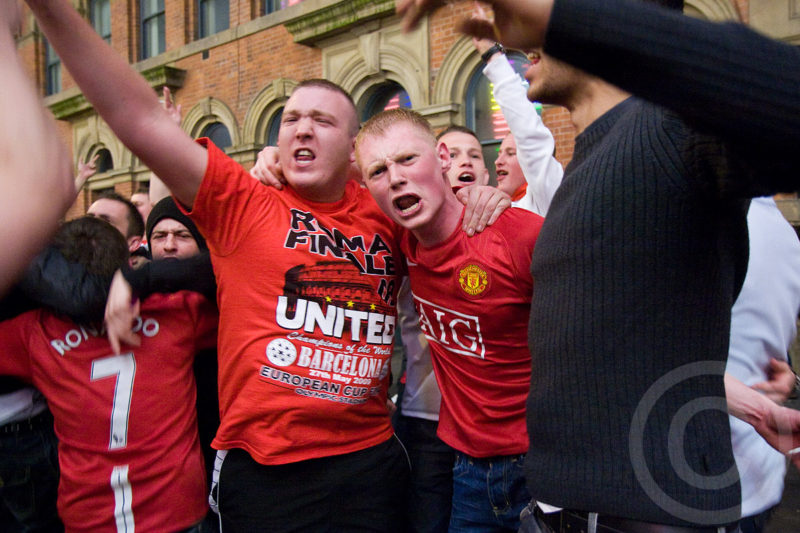 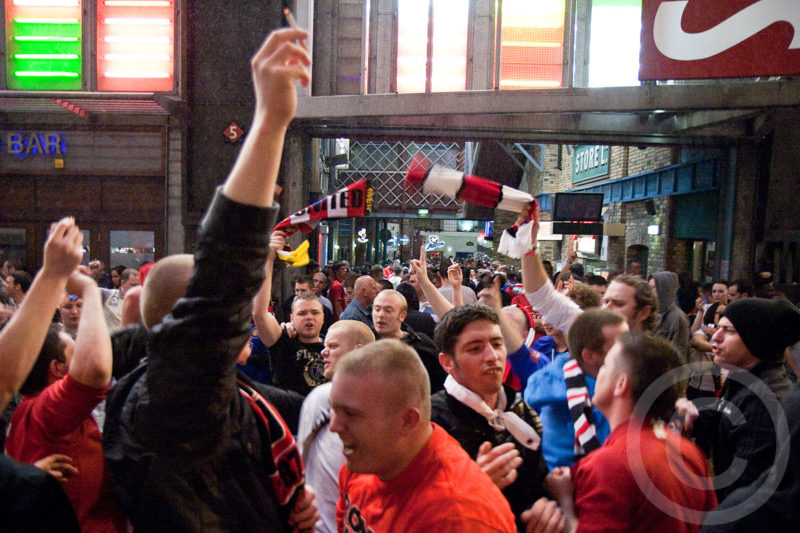 A sense of physical and emotional release took hold 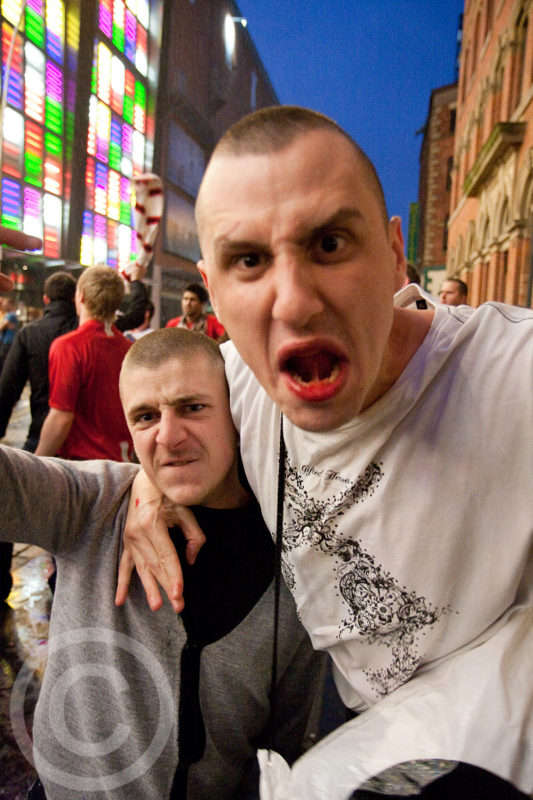 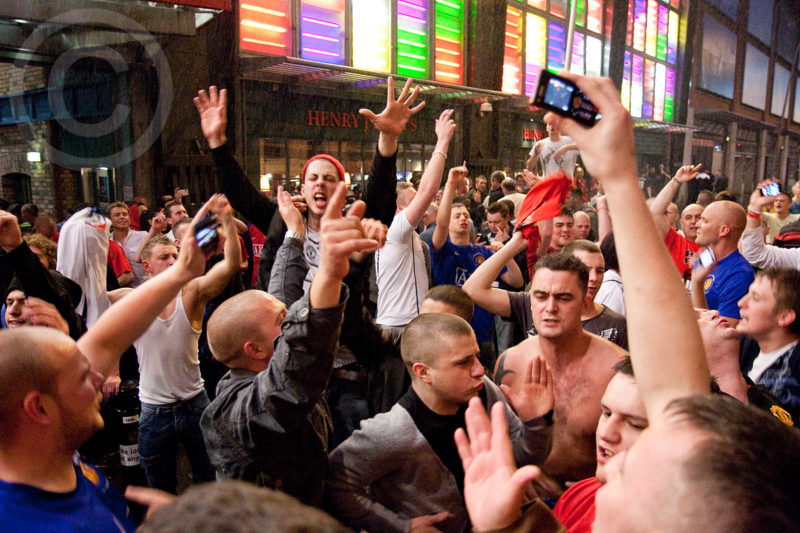 Their team had just lost a massive match. Months of tension was released 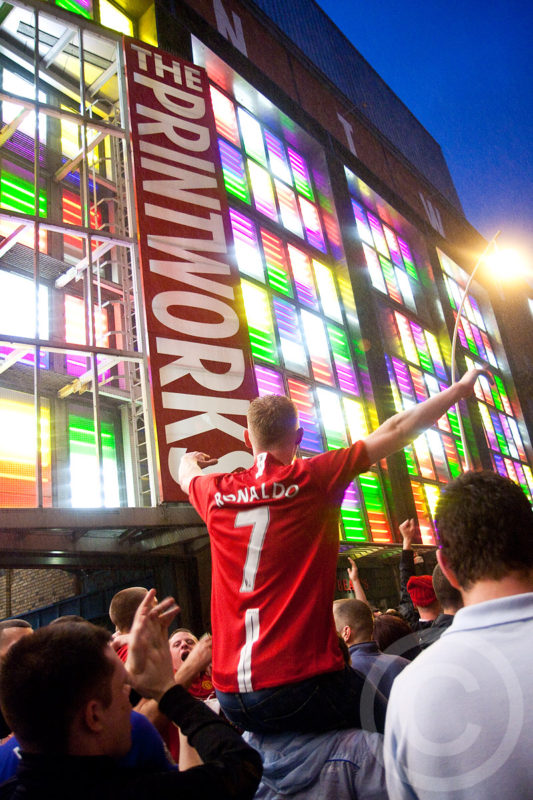 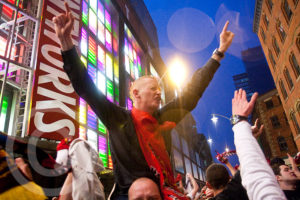 Fans stripped off their shirts 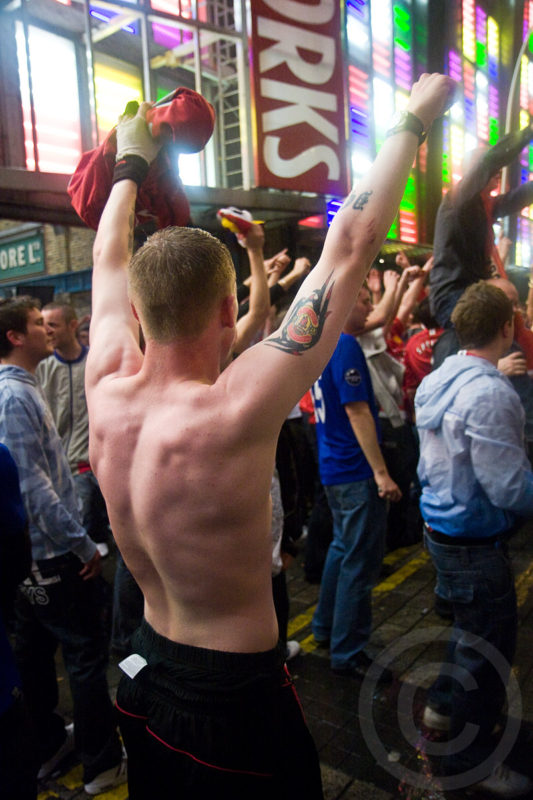 and the streets became shiny, reflecting glorious multi-coloured lights, as the crowd cried out 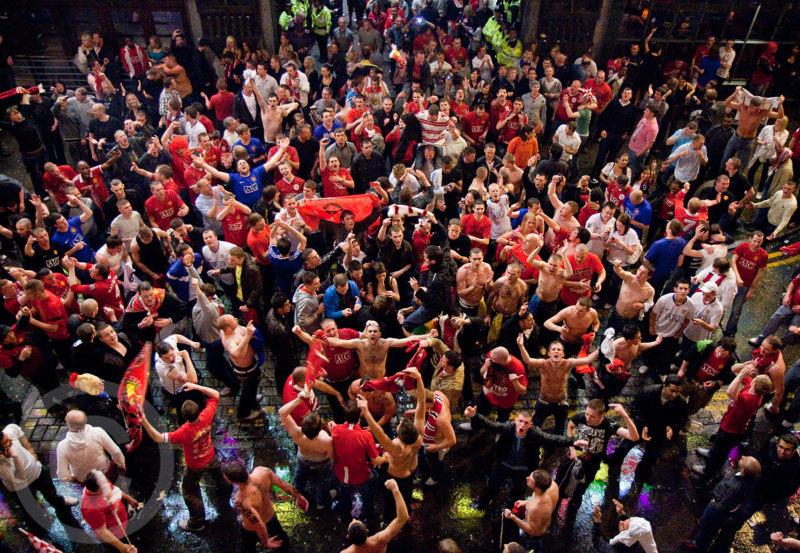 Using high ISO on a cheaper camera and then pushing the exposure in post-production adds noise to the pictures, but detail is still retained 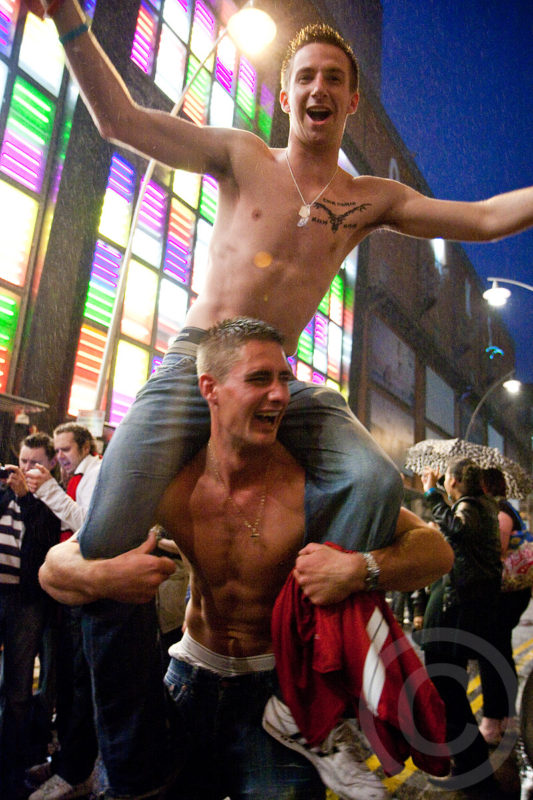 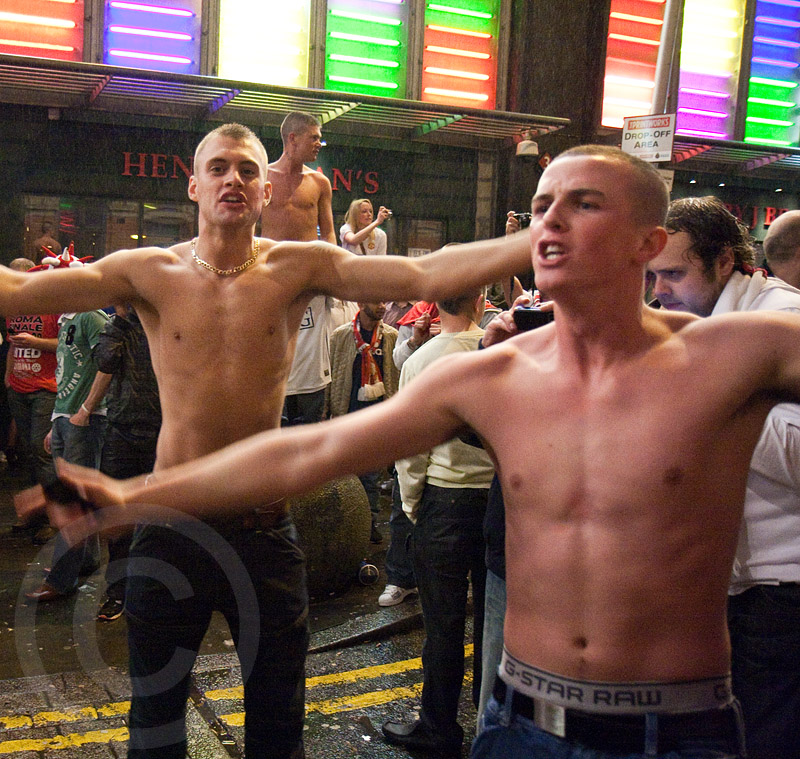 This shot’s full of motion blur, but I don’t care because there’s one emotion that’s sharp 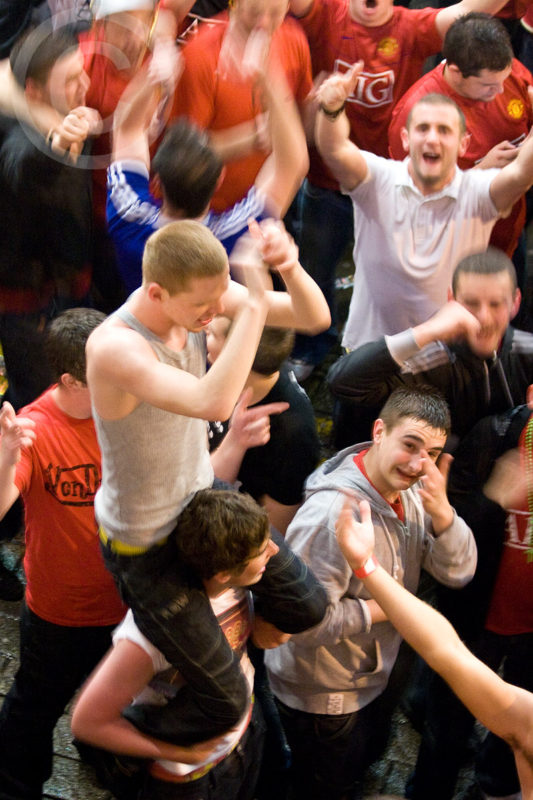 A primeval instinct had been awakened 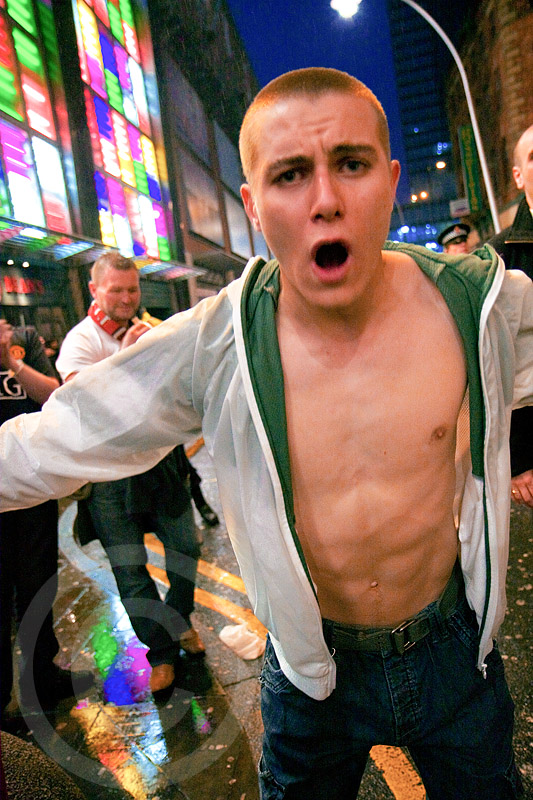 Police arrived and created a porous barrier, allowing people to leave but not enter 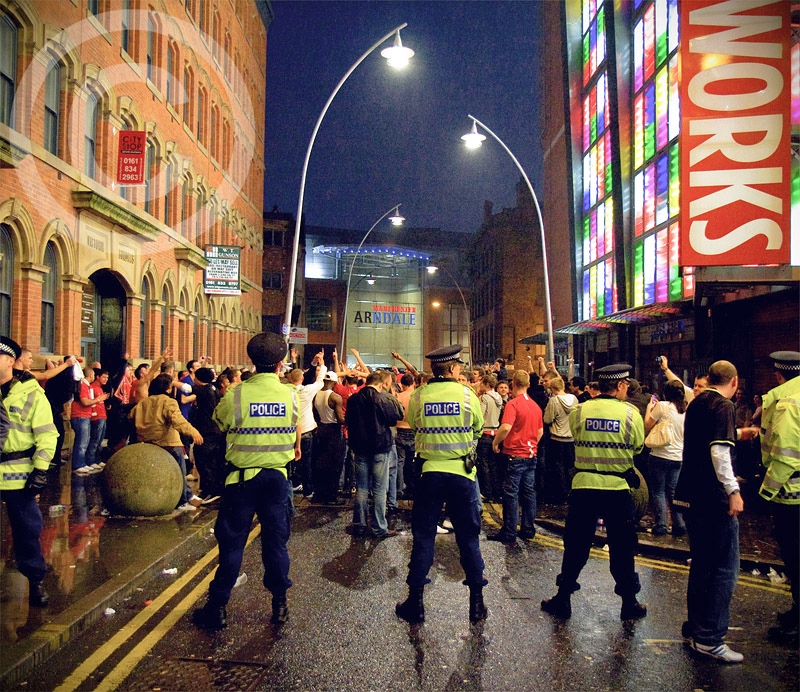 The year before, Glasgow Rangers fans rioted in Manchester during the UEFA Cup Final. The memory of that night would’ve been fresh 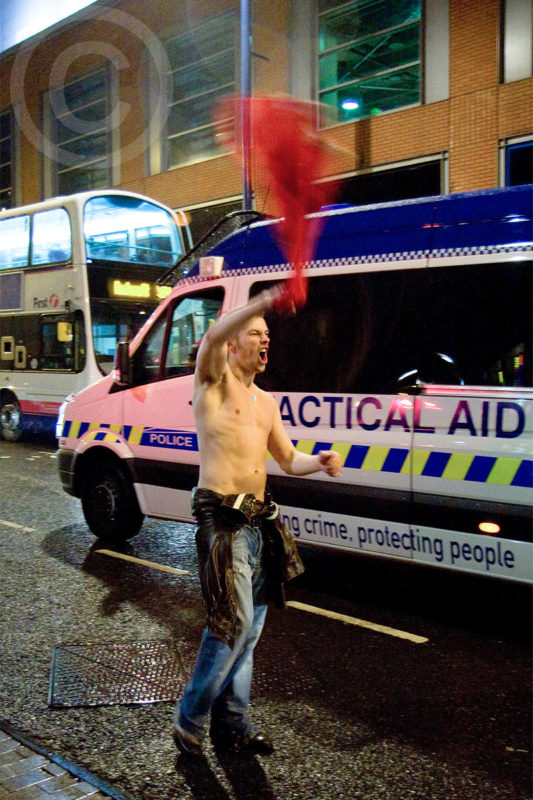 but there was no such disorder on this night 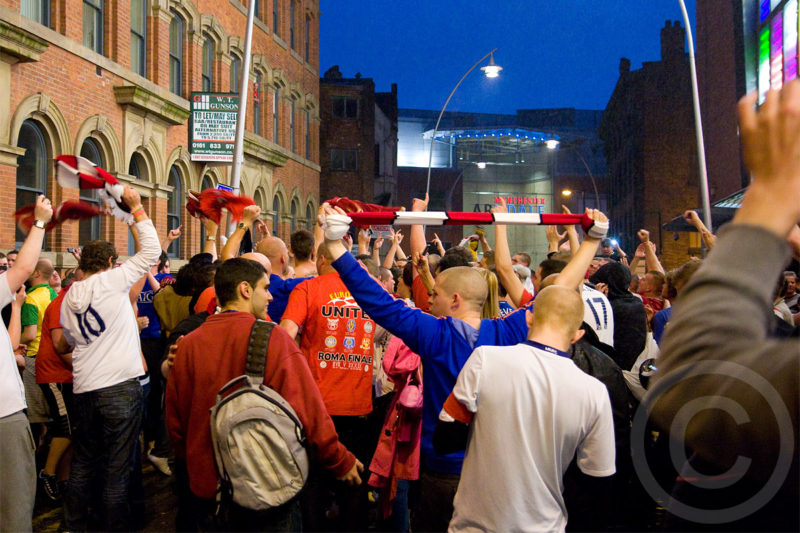 and the triumphant losers headed home.