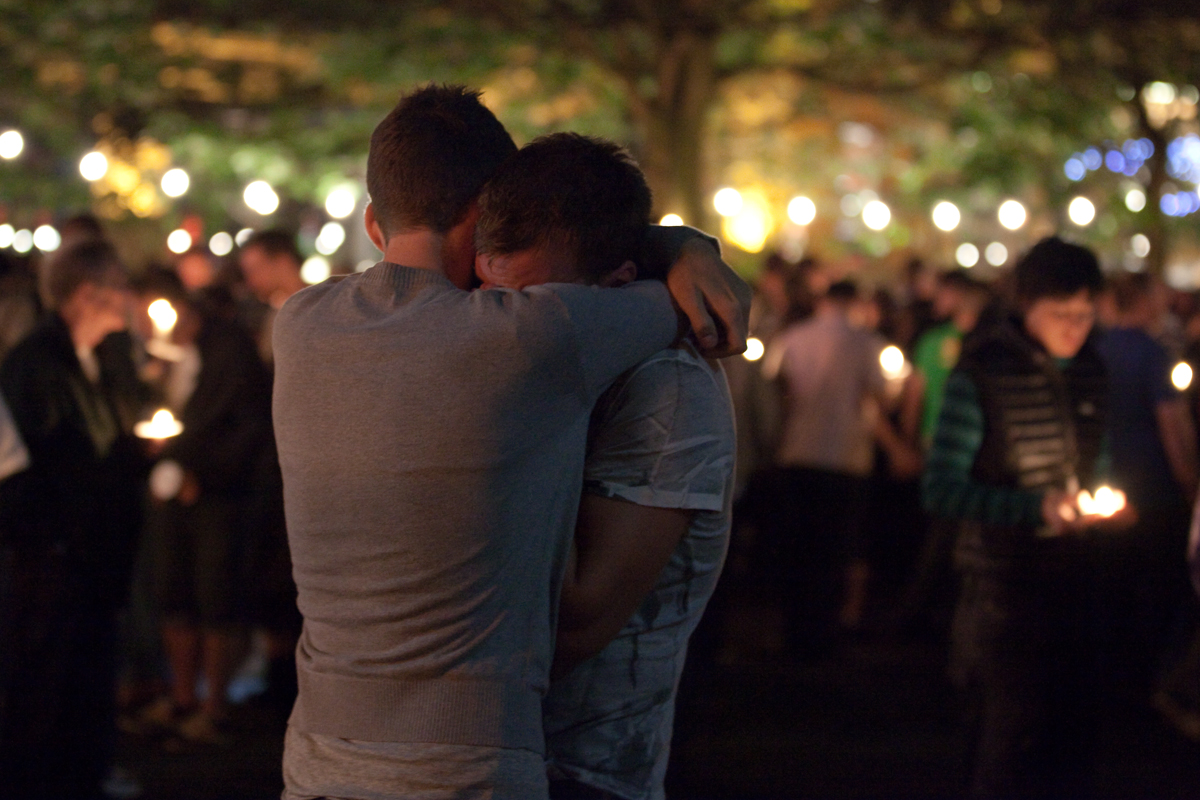 Reviewing the events I’ve covered in 2010, I’ve pulled out some of the prettier (rather than more newsworthy) pics. Often these are the moments that don’t make the news but, from my experience of the day, represent more of the atmosphere.
SHOW ME LOVE
New Year’s Day 2010:
Revellers down a side street celebrating the romance of the occasion. 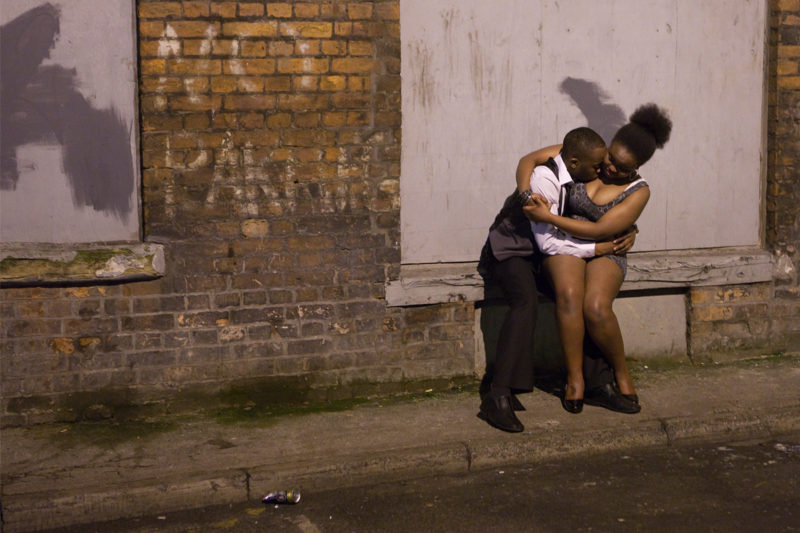 WHAT CAN WE DO?
February 2010:
Continuing my exploration of city-centre nightlife and the sightings that emerge when people let go – and consume lots of alcohol. 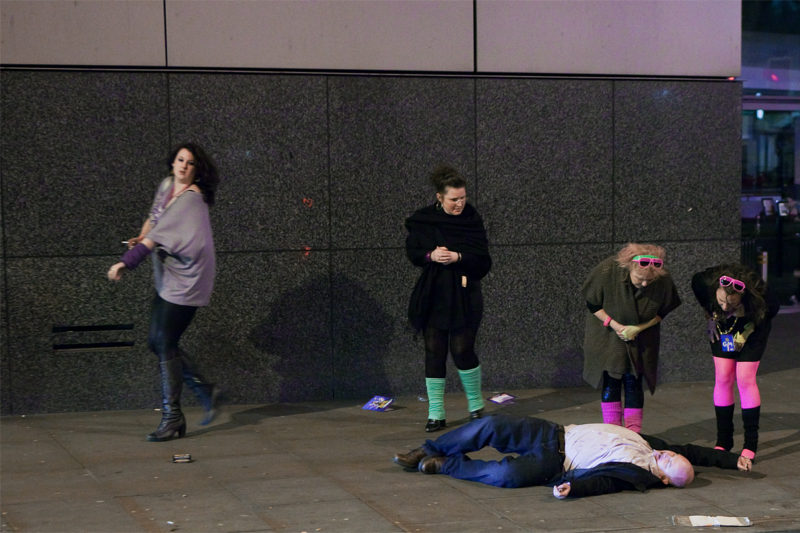 CAB RANCOUR
With the alcohol and the tension of a night out on the pull comes stress and fights. One hot spot is the long taxi queue that forms after larger clubs close. People spill out drunk and, perhaps, frustrated. Capturing these moments can be difficult. Revellers, private security and police are frequently hostile towards photographers in these situations. Keeping the shutter speed fast enough to enable capturing of frozen moments in low light is tough, too. You’ll also notice that the colour here isn’t perfect. I’ve struggled with colour correction under the artificial light of night and have improved my technique through the year. 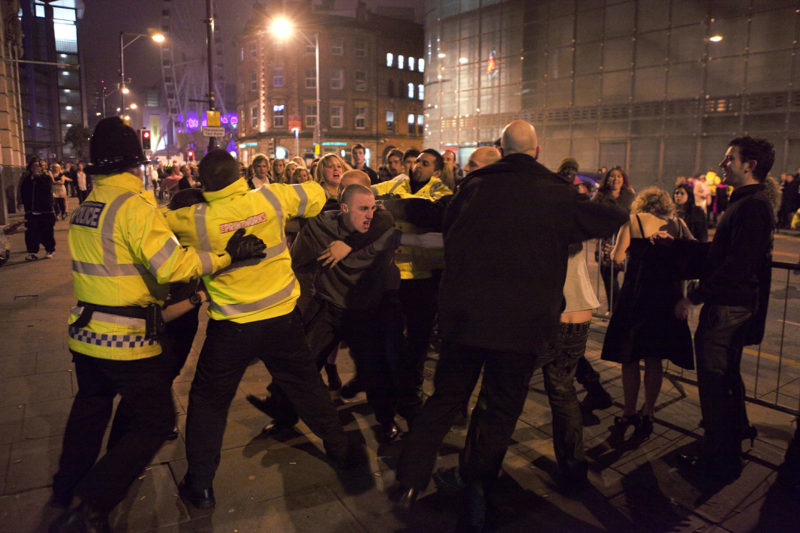 One of the year’s ongoing stories, the English Defence League (EDL) has held many large demonstrations in cities across the UK. Here, in Dudley, a lone policeman with dogÂ  holds back a crowd of hundreds. 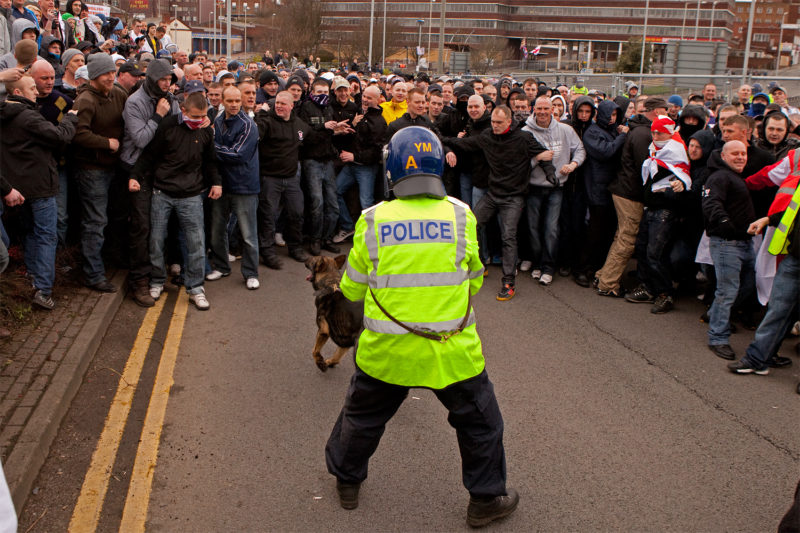 UNDER DIFFICULT CIRCUMSTANCES
Back to the night, the story behind this photo is interesting. It was taken metres from the fight photo above, but several months earlier. I shelved it for months as I wasn’t happy with the colour and brightness. When I improved my ability to deliver decent exposure and colour from the RAW file, I returned to this. Even now it isn’t perfect, but it’s a million miles from the shot, out of camera.
The title refers to the police work clichÃ©, but I like to keep title meanings relevant to my own experience too. That night I had taken a (prescribed) drug which, as a side effect, made me stoned. As a life long teetotaller, I’m not used to surrendering control to drugs. It was cold, I needed the toilet and I felt isolated and woosey. My coordination was also affected. I spent close to three hours sitting on a bollard near to this spot, waiting for something to happen – quite frankly lacking any physical motivation. I couldn’t even be bothered to get up to go home. When a fight broke out I snapped back enough to take three photos, of which this is one.
This is, for me, what “getting close” is all about. I was physically close but, more importantly, I connected to the experience of being stoned as I never had previously. 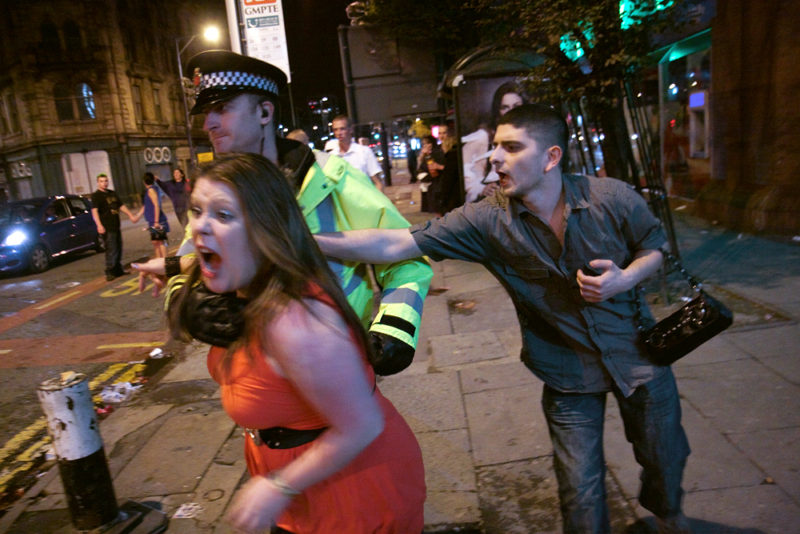 BANANAS IN PYJAMAS
Bizarre sightings pepper the cities at night. A banana with a condom was interesting and the colours were good. I framed the shot and waited for the taxi. Other food-related sightings included a ham joint on a car windscreen and, for reasons best known to the perpetrator, an apple, thrown at me from a flat above. 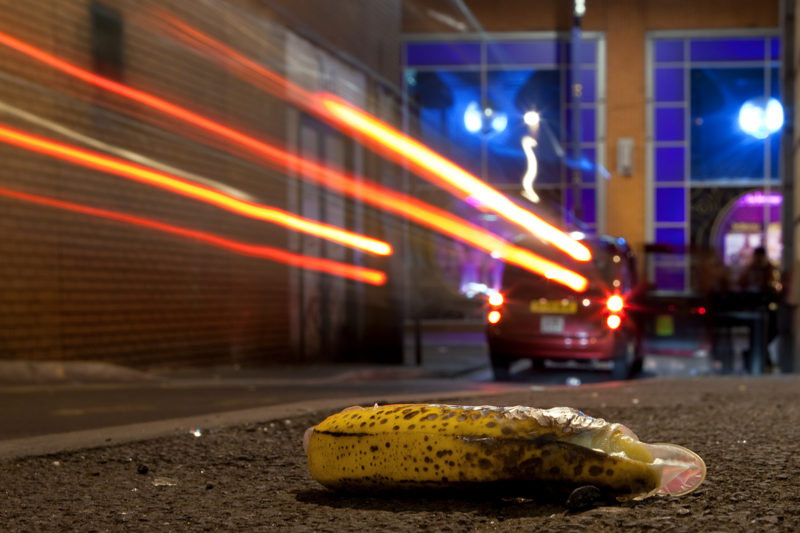 COMFORT AND JOY
This was the end of a long day. I had an early start and travelled to Cardiff to photograph the Welsh Defence League protest and Unite Against Fascism counter-protest. Whilst there I met up with photographer Maciej Dakowicz, whose Cardiff night photography has inspired me. This is my favourite from that evening. 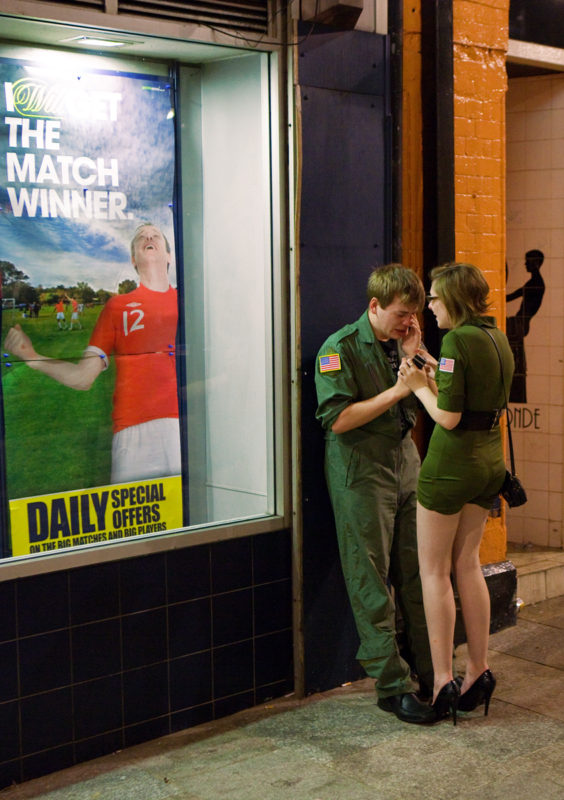 AGAINST ALL ODDS
I like photos with humans in cities and I like to capture emotions. If it’s a pretty photo too, then I’m happy. 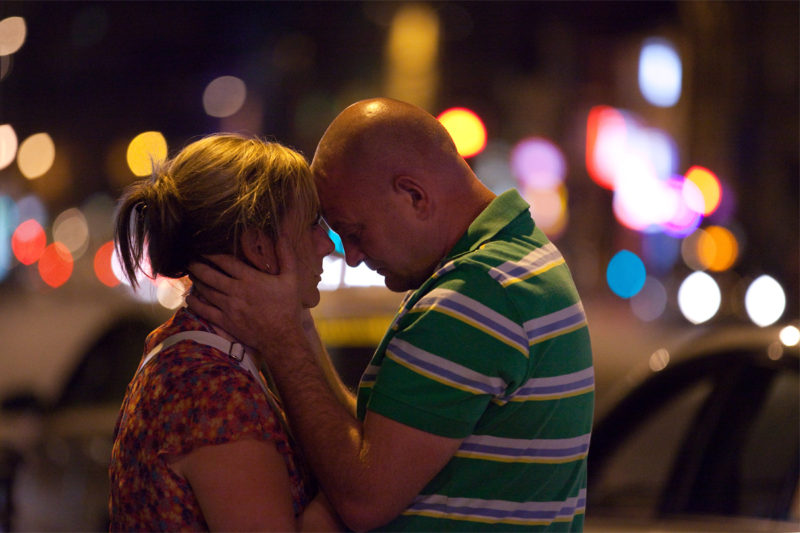 LONDON PRIDE 2010
London Pride always delivers humour and interest and is rarely rancorous, but for one element. The event is always protested by a group of evangelical Christians, opposed to equal rights and the event itself. Here one protester turns his back and walks away from the diversity bus, as it trundles down Whitehall. 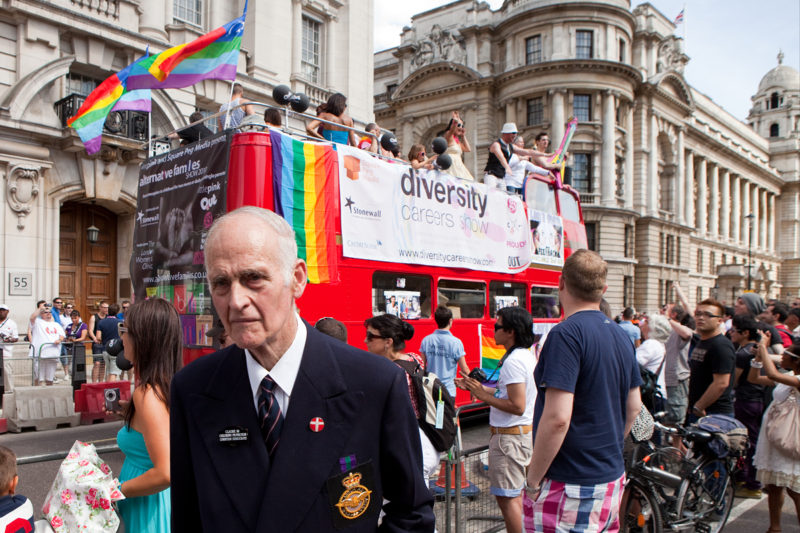 AFTER THE BRADFORD EDL DEMONSTRATION
August 2010, approximately 800 EDL supporters came to Bradford, as part of their tour of British cities. This moment, captured as the protest faded, summed up the mood for me, as I wondered “what was the point?” 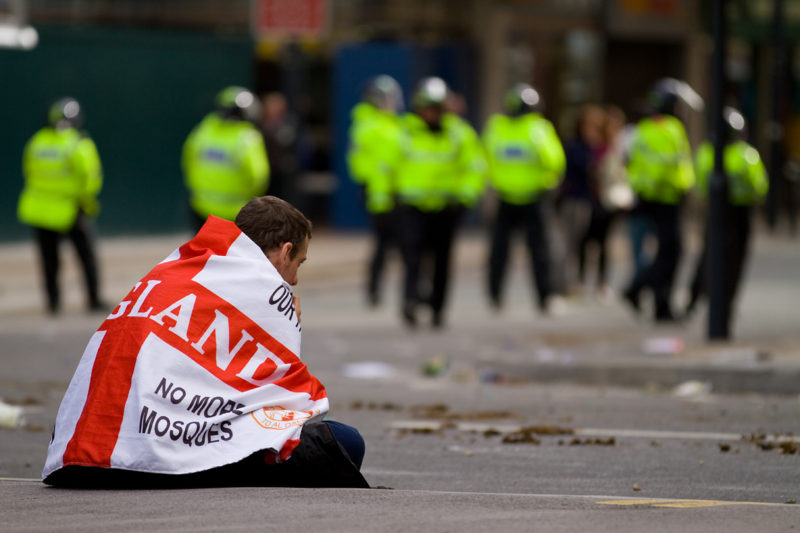 ANTIFASCISTS ATTEMPT TO BLOCK A MARCH BY THE ENGLISH NATIONALIST ALLIANCE
30th August 2010, the first of three from a long day that started in Brighton and ended in Manchester. The ENA organised a march through Brighton. People objected. For hours protesters blocked the march’s route and resisted police efforts to clear the way. 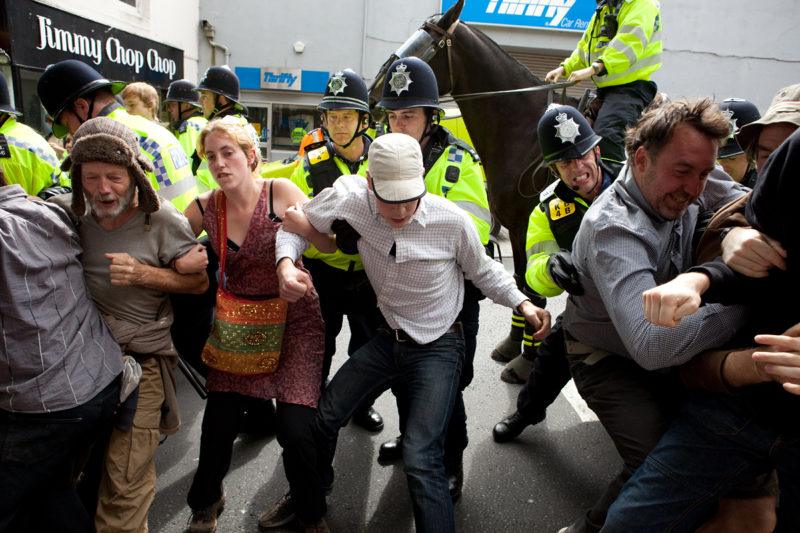 Continuing across Brighton, confrontations between marchers, counter-protesters and police occurred street after street. 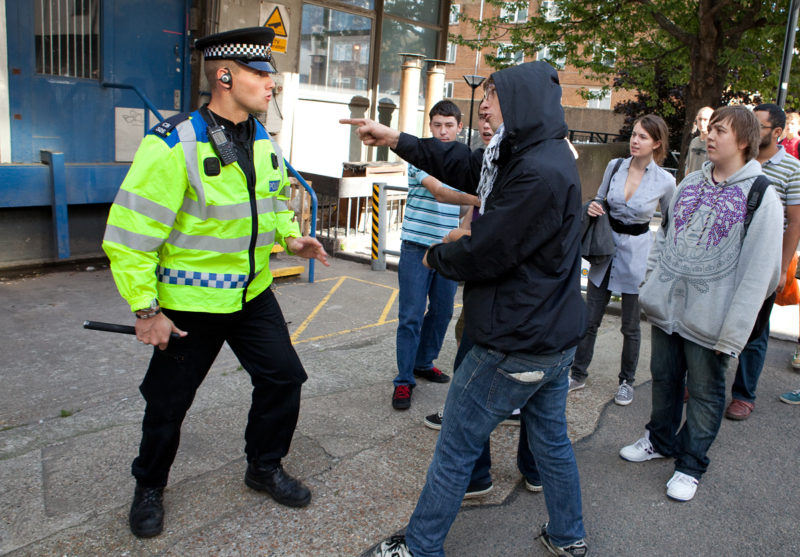 CANDLELIT VIGIL IN MEMORY OF THE VICTIMS OF HIV
An annual event, held in Sackville Park, Manchester, at the end of the city’s Pride weekend. This photo was taken at the end of the day, after covering the ENA event in Brighton. It’s hard not to be moved by the tenderness of this moment. It came at the end of an emotionally charged memorial event, at which many in attendance were either directly or indirectly affected by HIV. 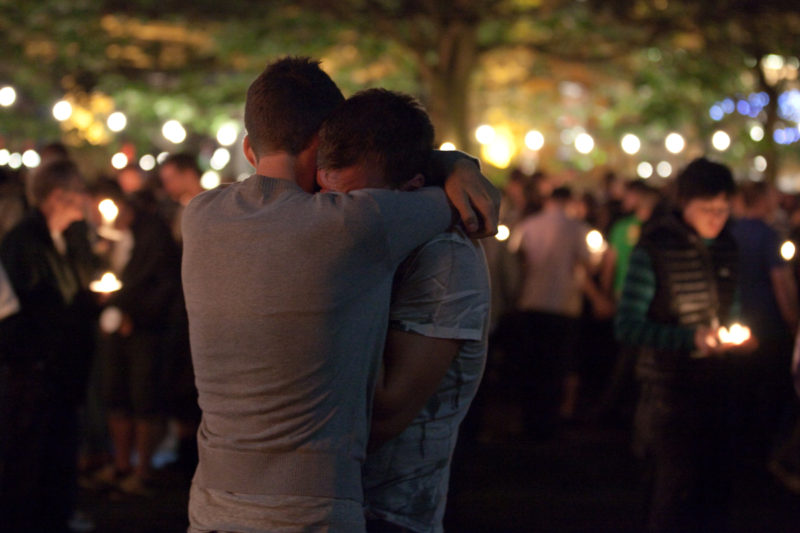 One of those delightful moments that’d never make a paper, this resonates with me on many levels. It’s an affectionate shot. 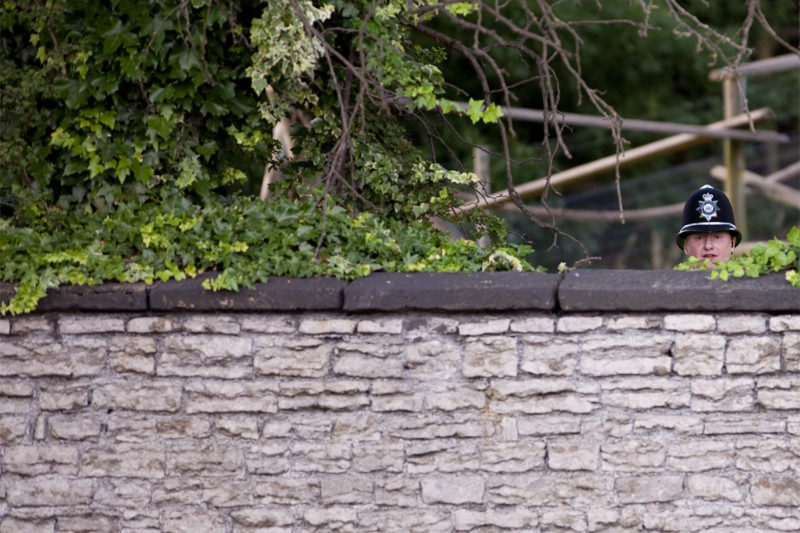 THE LABOUR PARTY CONFERENCE
Sometimes the most memorable moments from an event occur on the periphery, rather than at the centre of the action. Whilst Labour party delegates held small events across the city, city-centre life continued around them. One young man, caught short, found the Labour party banner a handy spot for relief. For me, the road sign above is the cherry on the cake. 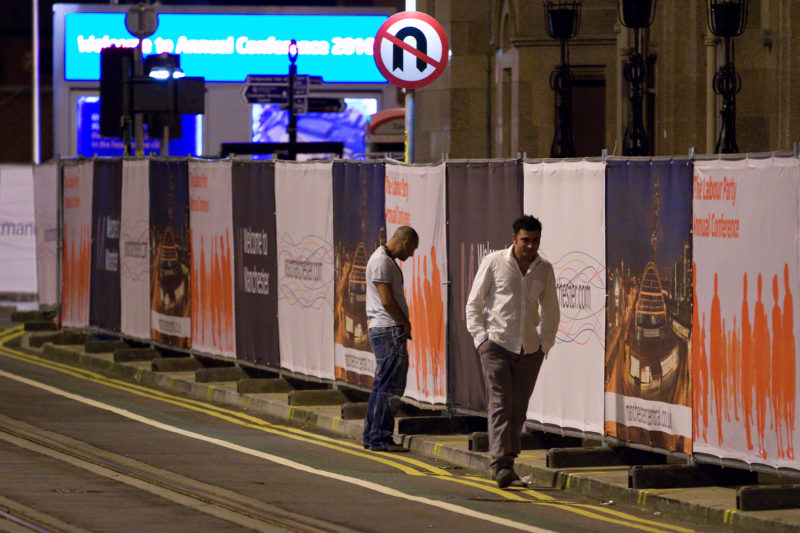 EDL PROTESTERS THROW A SMOKE GRENADE AT PHOTOGRAPHERS
There were a lot of EDL demos in 2010. I’ve noticed an increase in the use of smoke bombs and bangers at protests of all types, over the last 12 months. 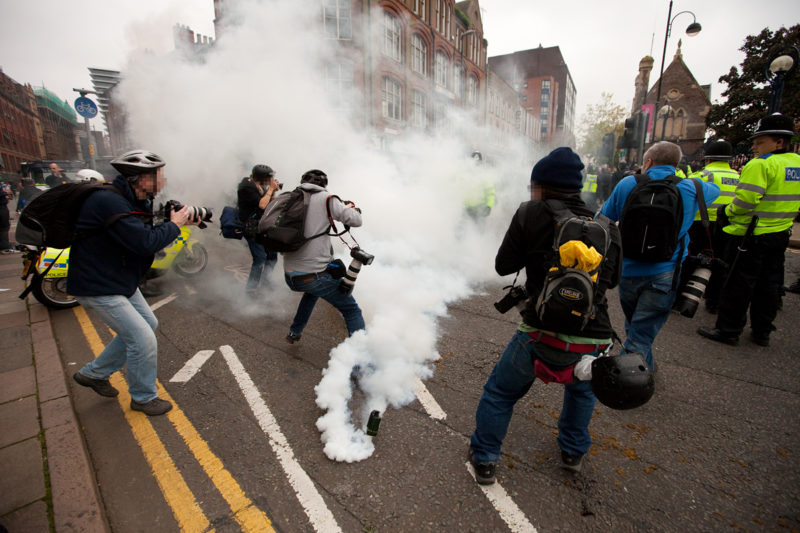 This is one of those moments that’s seemingly dull. A group of protesters, attempting to shut down a weapons component manufacturer in Brighton, were kettled in a field by police. Nothing happened for an hour, they just sat there. At seemingly boring moments, I try to find interesting pics. 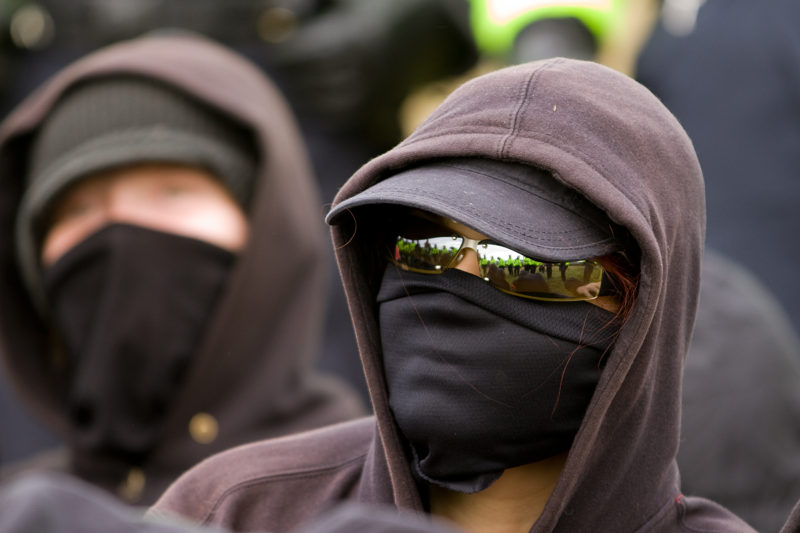 A similar moment to that above. The concern expressed in the body-language of this young couple really leapt out at me. The anonymous mounted police explain the moment and add tension. 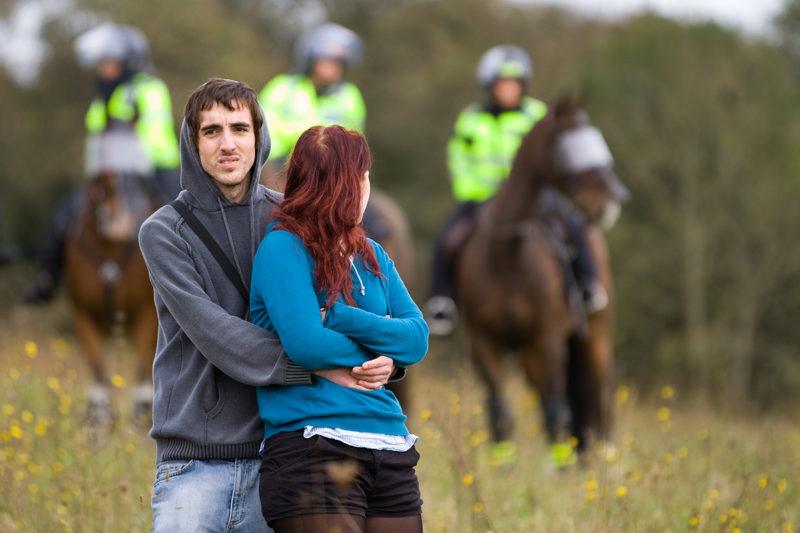 After an EDL demonstration outside the Israeli Embassy in London, supporters moved to Speakers’ Corner, where many talked and exchanged heated but good-humoured argument with opposition.Â  The light was gorgeous and I took the opportunity to play with flash and shooting in to light. I underexposed shutter speed to retain colour and detail in the sky and overexposed flash power to fill the subjects, in the face of the setting sun. 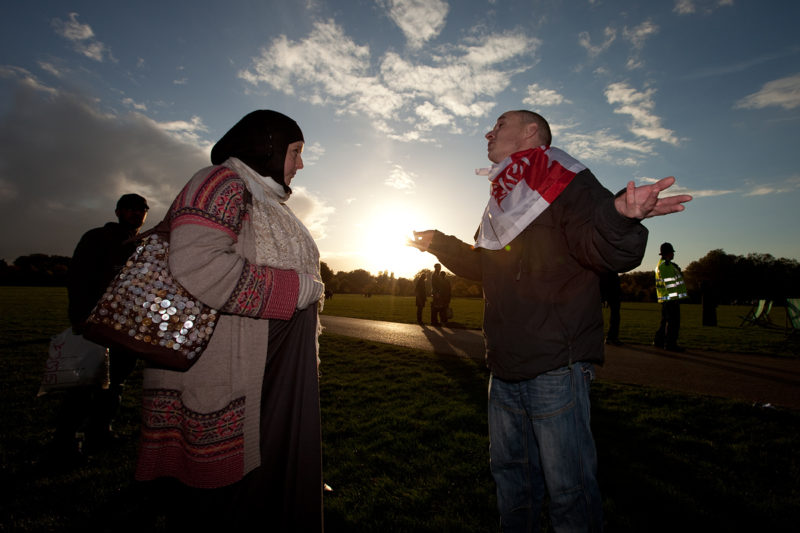 INSIDE THE KETTLE
One of the biggest stories of the year has been the protests against rising tuition fees and cuts in support for higher education. Several large and at times violent demonstrations have taken place in London and, in the face of a Conservative/Liberal Democratic coalition government that’s starting to impose massive cutbacks in public services, there’s been a resurgence in actions by those on the Left. Many protesters have been overtly hostile towards police and police have used controversial tactics such as kettling to contain protesters, sometimes for many hours and in bitter, winter conditions.
99% of the work in this shot was being there.Â  In fact that’s true of every photo. From inside a kettle in Trafalgar Square at one of the protests, it captures the moment when the first flurry of snow fell on the city. It’s a rather pretty scene, despite the circumstances. 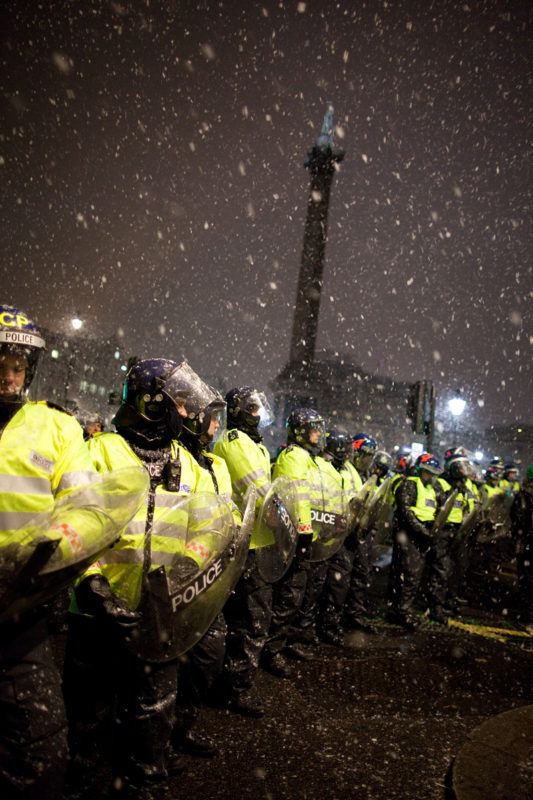 Also from the student protests, this shot’s interesting for the face off between protesters and police, but would be nothing without the backlight and the mist. 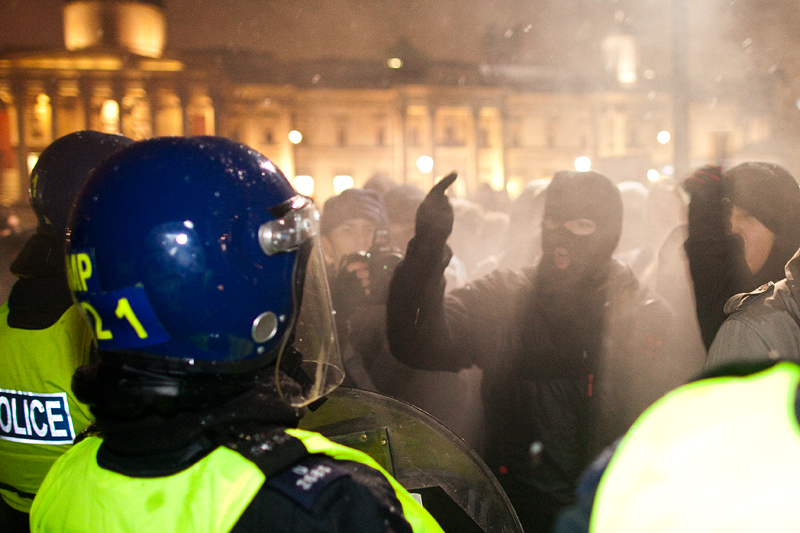 THE FOUR HORSEMEN OF THE ACOPALYPSE
The pun came about earlier in the day, chatting to a fellow photographer who was looking for a title for a photo of a troop of police horses. There was a sense of imposing doom from the start as, at this student protest, as well as the usual placards, banners and anger at policy, other disaffected groups and anarchist protesters from abroad stirred amongst the crowds. I stole the title back as soon as I photographed this dramatic scene. It’s far more appropriate in this use :oP 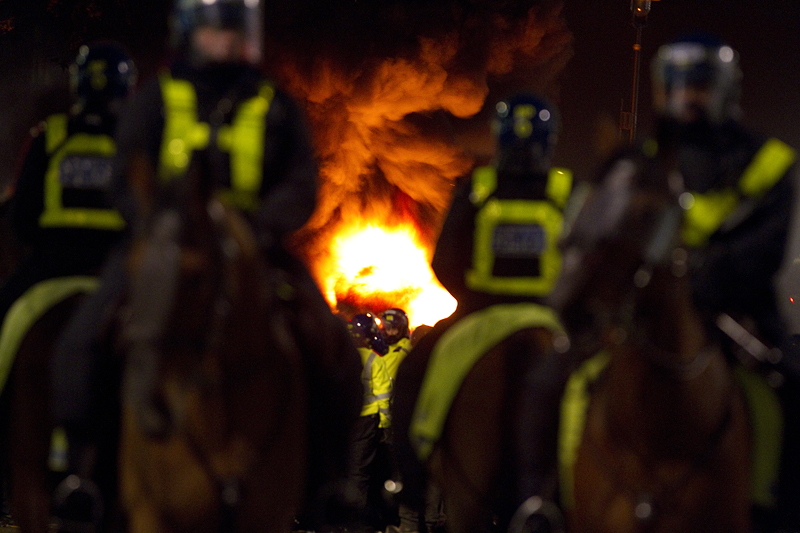 AND FINALLY
Red flare and flags, Houses of Parliament, protesters – it’s the time and the place – there’s likely to be many more of these scenes in 2011. 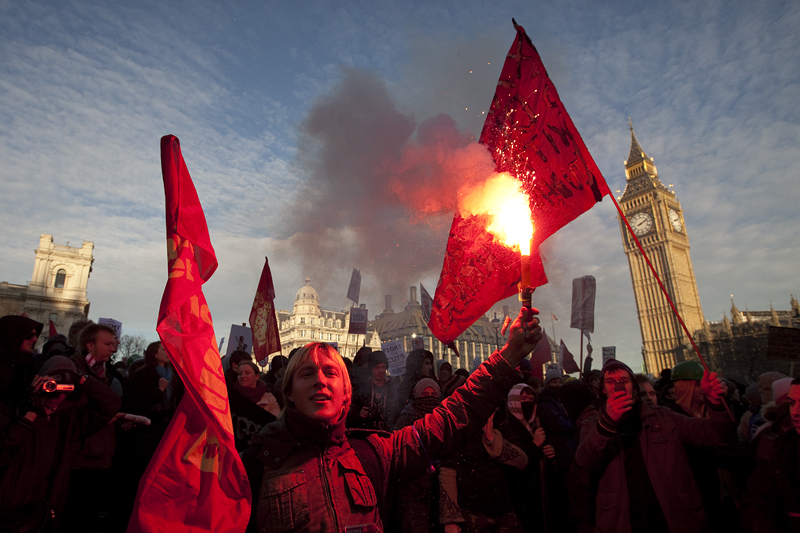